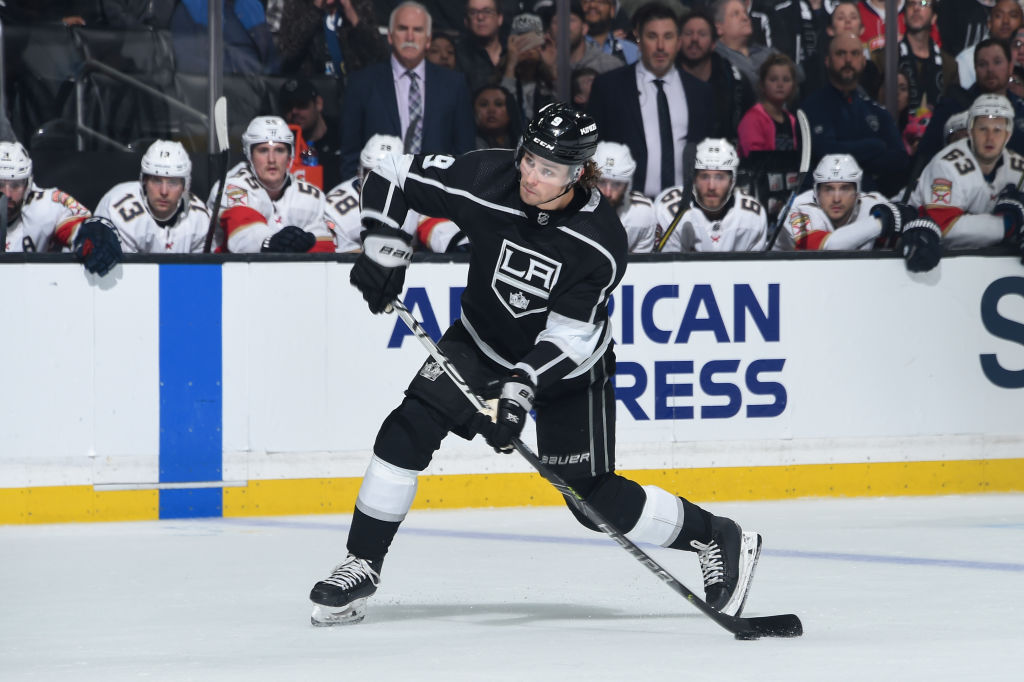 Wow. The LA Kings earned a hard-fought two points in the standings with a 3-2 shootout victory over one of the best teams in the National Hockey League in the Florida Panthers on Sunday night.

A few takeaways from the contest.

1. Welcome back, Kupari and Vilardi

With the rash of injuries and subsequent roster shuffling, the LA Kings made a flurry of roster moves in advance of Sunday’s game, which saw Martin Frk, Gabe Vilardi, and Austin Strand recalled from Ontario.

Rasmus Kupari was recalled prior to the road trip to San Jose on Saturday night, but both he and Vilardi flanked Quinton Byfield on the team’s third line, a line that really hadn’t done much of anything lately.

Kupari opened the scoring for the Kings with just over eight minutes left in the first period. The play was set up in transition, with Vilardi ultimately screening Panthers netminder Spencer Knight, allowing Kupari to knife his way through traffic and bury a beautiful backhand shot.

“They were desperate, they wanted to prove that the staff made mistakes by not keeping them, and that’s what players have to do,” Kings head coach Todd McLellan said of Kupari and Vilardi. “If they keep proving us wrong, that’s a great thing, we want to be wrong.”

For Kupari, that was his first NHL goal since December 5, and he could have an opportunity to create some additional playing time for himself with so many people out right now.

2. Poor start to the second period

Unfortunately, Florida regained the lead quickly into the second period, the first on a shorthanded goal from Eetu Luostarinen. The Kings have now given up eight shorthanded goals, tying them for the most with the New Jersey Devils.

Then exactly three minutes later, Brandon Montour tallied his seventh goal of the season. Giving credit where credit is due, Aleksander Barkov did a great job of recognizing the traffic in front of the net, firing a blast from the point.

The puck landed to the left of Jonathan Quick but right in front of Montour, who made quick (no pun intended) work of the rebound.

With the LA Kings on the power-play and their net empty, Los Angeles had a 6-on-4 advantage with just under a minute left, trailing by one. After the puck was kicked back up to Sean Durzi at the blueline, the young defenseman had a terrific fake, just enough to create some separation, and he passed the puck over the Frk above the left dot.

You could feel the moment building, accompanied by Alex Faust’s call, “Frk. Loads up. Fires. SCORES!” evening the score at two goals with 30 seconds left in regulation.

What a goal. What a moment.

“They made it hard to get through the neutral zone, but we stuck with it,” McLellan said of his team. “Not every shift was an offensive shift, but we thought we were getting the odd chance. Kind of like Boston, where we had to use every minute we were given and we couldn’t waste any. It worked again for us.”

Jonathan Quick appeared in his 700th career NHL game last, a feat that only 29 other goalies can say that they’ve accomplished. It was good to see all of Quickie’s teammates wearing “700” hats during pre-game warmups. In the game itself, the future Hall-of-Famer came up with the timely saves, flashing the leather on a shot in tight from the Panthers during the second period.

And it was fitting that the shootout came down to his save on Anthony Duclair, giving the Kings a much-needed two points.

“Looking back at playing that many games, you just think about how many great relationships you’ve made over the years,” Quick said after the win. “I feel fortunate to have all those memories with all those guys […] It was great we were able to win, and that’s obviously the number one key there.”

It was a big character win for this shorthanded group and, frankly, washed away the sour taste of losing two to the Sharks.

The LA Kings will have yet another big test against the high-powered Colorado Avalanche on Tuesday. Puck drop is set for 7:30 pm PT.