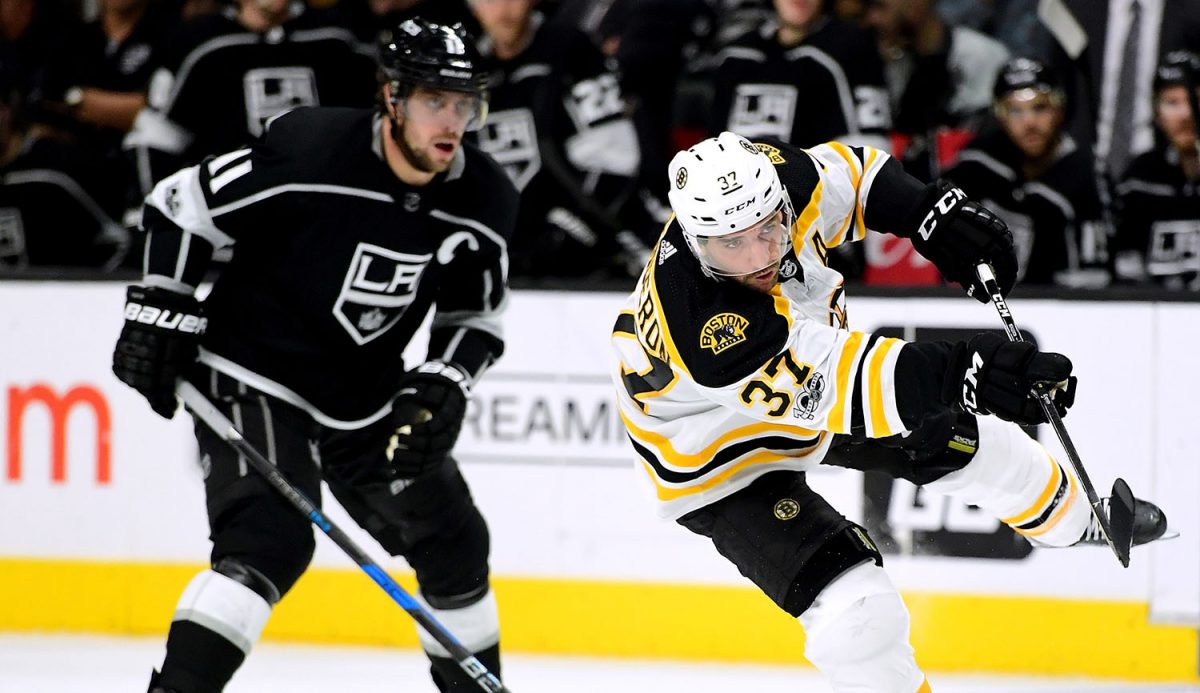 The LA Kings dropped a 7-0 clunker at home to the Boston Bruins as Jake DeBrusk collected his first career hat trick in the contest.

Four things that stood out in Monday’s loss:

Things could not have gotten off to a worse start for the LA Kings. Just 61 seconds into the game, Jake DeBrusk opened the scoring on a goal that Jonathan Quick would probably like to have back.

Then with just under six-and-a-half minutes remaining in the first period, DeBrusk scored again on a terrible turnover by Mikey Anderson, who looked like he reacted quickly to non-pressure.

Hotter than the ☀️ pic.twitter.com/4aH9Xapcol

On the play, the young defenseman had Phillip Danault open in the middle of the ice, but the pass sailed behind him and went right to DeBrusk. Quick got a glove on it, but there was very little he could do there.

“You don’t see that out of Mikey very often, but at the same time, they’re good at what they do,” acting head coach Trent Yawney said after the game. “They kind of sit in the weeds and then they jump out on top of you. It wasn’t a great read on his part, but at the same time, he’d probably like to have that play back, that’s probably one in three years I’ve seen from him.”

DeBrusk’s effort in the first period marked his 10th career multi-goal game, but he was far from finished. The 25-year-old tallied his first career hat trick on a questionable high-stick deflection past Quick in the second period. The goal was reviewed by Toronto and upheld to give the visiting Bruins a 3-0 lead.

I’m not usually one to blame to point fingers at the referees in a game, but there was an apparent non-tripping call near the end of the first period. With the Kings on the penalty kill, Adrian Kempe was taken down from behind on a partial breakaway by David Pastrňák.

The LA Kings benched reacted strongly as no call was made.

3. Jonathan Quick shaky from the get-go

Welp, you kind of had to expect that the Kings were going to put up a clunker after playing so well lately. Los Angeles came into this one 11-13-3 against teams currently occupying a playoff spot, and the Bruins presented an excellent litmus test for this team. Unfortunately, Jonathan Quick just never looked comfortable in net against a Bruins team that put a lot of traffic in front of him.

Aside from the DeBrusk goals, Quick couldn’t seem to handle any pucks cleanly. Now, he made a couple of outstanding saves, one in the first period off his toe and another early into the second period on a windmill save.

However, after Patrice Bergeron and Taylor Hall made it a 5-0 game for the B’s, Quick was pulled in favor of Cal Petersen.

Monday marked the first time Quick had allowed at least five goals since January 17, so hopefully, he can bounce back in his next start.

The LA Kings’ power-play has not been a strength all season long, but they found themselves on a 5-on-3 man advantage for 1:22 in the second period. The Kings had far too much passing during that time, attempting to change the angle.

I would have liked to see more shots put on net, with the hope that one either gets past Bruins’ netminder Jeremy Swayman or a rebound provides another chance. At the time, the Kings were down 3-0, but this penalty kill for Boston really gave them the momentum for the remainder of the game.

“Just not getting shots through,” Alex Iafallo said, who now has just one goal in his last 11 games. “I feel like we had one good chance, but [Kempe] just kind of missed it there. We’ve got to work on getting the puck back and got more shots. 5-on-3, that’s a big momentum changer and we needed to get a goal there. Not getting one there definitely deflated us, so we have to work on that, get more shots through and get tips in front.”

Overall, not a lot of positives to take from this one. If there is one, the Kings outshot their opponent for the 21st consecutive game, tying the second-longest streak in NHL history since shots began being tracked during the 1959-60 season. It is the longest such streak since St. Louis during the 2001-02 season.

“Now, we’ve got to reset again and start all over. We’re going on the road against some real good opponents, and we’ll have to get our game back really quickly,” Yawney said.

Throw away the game tape and go win on Wednesday in Dallas, with puck drop set for 5:30 pm PT.