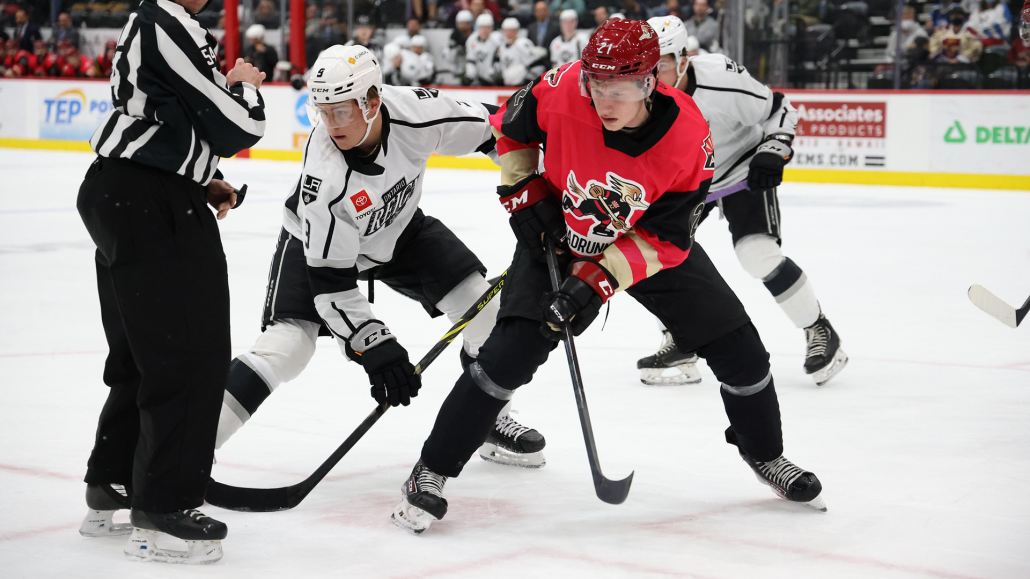 The Ontario Reign took on the Tucson Roadrunners for the second straight day, coming away with a 5-1 win.

You haven’t seen speed until you watch Austin Wagner on the penalty kill. pic.twitter.com/ZcEPOUmHdj

1 wasn’t enough for JAD. Here’s how he scored his 2nd in less than 2 minutes to make it 4-1! pic.twitter.com/uZ3dBkih6t

Three things that stood out in Sunday’s win:

The Ontario Reign penalty kill has been on the uptick for the last little while, and today was an excellent showing for the short-handed units. Killing 5-of-6 penalties (83.3%) with efficiency, the Reign are starting to streamline how the playoffs could look for the team.

Though there is work to do for the Reign, who sit glaringly in 26th on the penalty kill, by stringing together strong performances on the penalty kill, the Reign can begin to operate at a top tier level for the remainder of the season. The units also scored a short-handed goal, so there’s always that.

The answer is John Lethemon. After four years at Michigan State University, Lethemon made the jump to professional hockey in 2020.

Currently playing for the Greenville Swamp Rabbits, Lethemon has tallied good numbers, putting up a .903 save percentage last year and currently holding a .914 save percentage for the season. Lethemon was called into action today and played an excellent game.

He stopped 27 of 28 shots, ending the night with a .964 SV%. With numbers like this and a good team in front of him (his record with Greenville is 8-9-3), he could be a solid goaltender in the AHL and maybe the NHL.

However, he needs to begin making a splash soon to keep the dream alive.

3. A pretty good month for the Reign

The Ontario Reign finished the month of February with a record of 6-2-0-1. As the playoffs loom, the Reign had a well-structured month of hockey and pulled out 13 of a possible 18 points that they could have gotten. This bodes well for the stretch run, but March will be a bit different for the team.

There are 24 possible points on the table for the team and no games against the Stockton Heat. If the Reign can pull at least eight wins out of the month (16 points), they should be able to stay strong in the divisional standings. Without playing the Heat, the Reign stand a chance to have fortune turn on their side and take the divisional lead as they try for the bye week in the playoffs.

The Reign are back to the ice on Wednesday for their third game against Tucson.