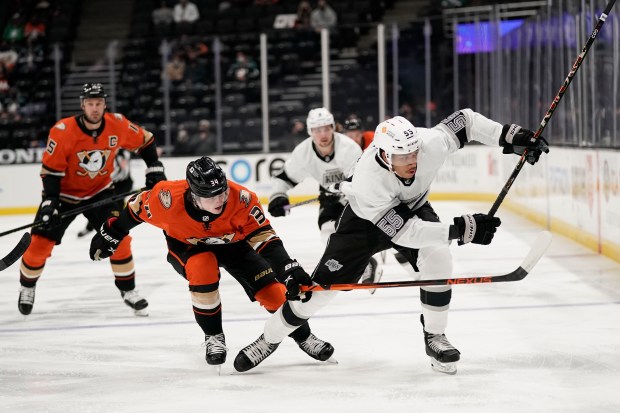 The Freeway Faceoff is back, and it’s been quite some time where two points matter as much as they do between the LA Kings and Anaheim Ducks. The latter beat the Kings 5-4 in a shootout at STAPLES Center back at the end of November, highlighted by a five-goal period between the two teams.

Now, with both teams vying for the third spot in the Pacific Division, the Kings are up two points with two games in hand.

Given that Cal Petersen just went back-to-back against the Coyotes on Saturday and Wednesday, I would expect Jonathan Quick to get the nod on Friday. The 36-year-old future Hall-of-Famer has played pretty well against Anaheim throughout his career. In 48 games, Quick owns a .910 SV% and 2.43 GAA with one shutout.

Anthony Stolarz went for the Ducks on Tuesday, so John Gibson would appear to be in line for a start against Los Angeles. The 28-year-old comes into this one with a .922 SV% and 2.23 GAA with two shutouts in 22 career games against LA.

Here’s how the team’s matchup, noting the primary difference is Anaheim’s special teams have been something truly special this year. Look for power-plays to be the difference in this one, although the Kings have been much better on the penalty kill lately.

The Kings and Ducks are coming into this one dead even, courtesy of The Action Network. The money line has been jumping around, and I wouldn’t be surprised if it settled with Anaheim as slight favorites just before puck drop simply because of the venue.

Here’s how the Kings lineup in practice on Thursday, via LA Kings Insider:

Here’s how the Anaheim Ducks lined up in Tuesday’s shootout win over the Sharks:

The Captain is back! Here's who we fly with. #FlyTogether pic.twitter.com/ggFYrGf8KN

As noted above, the Ducks’ power-play is light years better than in recent seasons, which has been a primary contributor to the team’s overall success this year.

Tomorrow's #NHLDucks notebook today: Effective power play is the key to Ducks’ turnaround this season. Plus, an update on Ryan Getzlaf and Josh Manson. https://t.co/6haVQ5QLfa

The LA Kings and Ducks get underway at 7:00 pm PT.