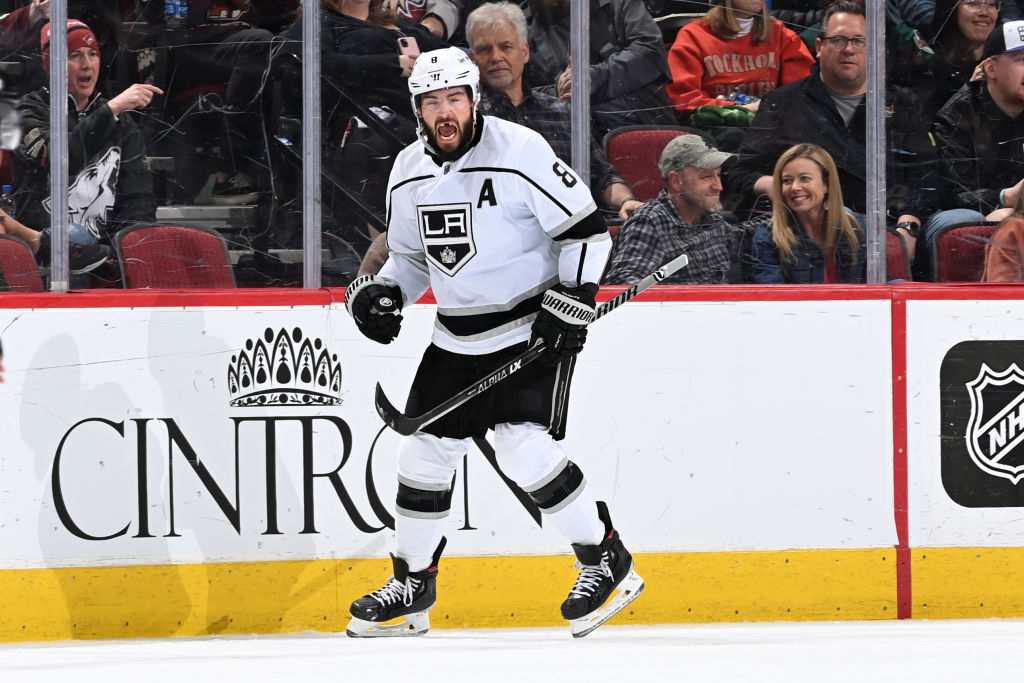 How good does it to be playing meaningful hockey games at this point in the season? Very good is the answer you’re looking for.

The LA Kings were on a back-to-back as they visited the Arizona Coyotes at the Gila River Arena for what they hoped would be an easy two points, but that wasn’t necessarily the case.

Despite dominating play early on, the Kings surrendered the game’s first goal to… Anton Stralman. Alrighty then.

Thankfully, immediately after, Adrian Kempe buried one off of a nice feed from Anze Kopitar to tie the game at one.

In the second period, however, the Kings began getting more and more discouraged, as they allowed two consecutive goals to Lawson Crouse and Clayton Keller and went down 3-1.

However, after that, the tide shifted as the Kings scored four unanswered goals, including two on the power play (I know, what a miracle), and won the game.

“We’re having so much fun. I haven’t had this much fun in a couple of years. Every game is just so important,” Kings franchise defenseman Drew Doughty told media in the post-game.

“We always know that we don’t give up. I don’t think there’s a single guy in that room that’ll give up, even if it’s 5-0,” Doughty said when asked about the team rallying from two-goal deficits on back-to-back nights.

The LA Kings are now off until Wednesday, when they will play the Coyotes again.

Drew Doughty just continues to have a terrific season and is cementing himself as one of the best players ever to represent the city of Los Angeles in the NHL.

Despite starting the game off rough, with two awful pinches that led to goals, Doughty finished the night with two goals, three points, and the highest game score of any player on either team last night.

“The points are going in, but my defending is really good, like it always is,” said a confident Doughty in the post-game presser.

Doughty is now up to seven goals and 29 points through 31 games played, which would be on pace for 77 points through a full 82-game season. Just a tremendous campaign for him.

2. The power play beginning to form…?

I don’t want to get too far ahead of myself, but could we be seeing the power play finally begin to take form? If so, the rest of the Pacific Division needs to take watch because a Kings team with an established power play has the ability to beat just about any team in their division in a seven-game series.

The LA Kings got a power play goal from Kempe against Las Vegas on Friday and then got two last night, one from Kempe and another from Doughty. Hell, even Dustin Brown got on the board on the power play, as he now ties Vladimir Tkachev in power play points this season… anyways…

McLellan was very happy with the power play as well, as he said, “Obviously, the power play got us the win. It’s been a while since we said the special teams won us the game.”

3. Third-line continues to get minimal looks

After the Kings win vs the Golden Knights on Friday, McLellan praised the third-line and even said that they made it “hard to take them off of the ice.” Well, it didn’t look like that last night, as it becomes growlingly frustrating to see them not get opportunities.

I know, I know, I shouldn’t be getting down on the team after a win, but it’s hard to watch Quinton Byfield and Andreas Athanasiou both get less than 12:10 of ice-time when we know what they’re capable of.

Maybe it’s the fact that Dustin Brown kind of brings the overall line down, or maybe it’s because McLellan just doesn’t fully trust the rookie Byfield yet. Whatever the case may be, we need to see them get more opportunities, especially against a team that is as weak as the Coyotes are.