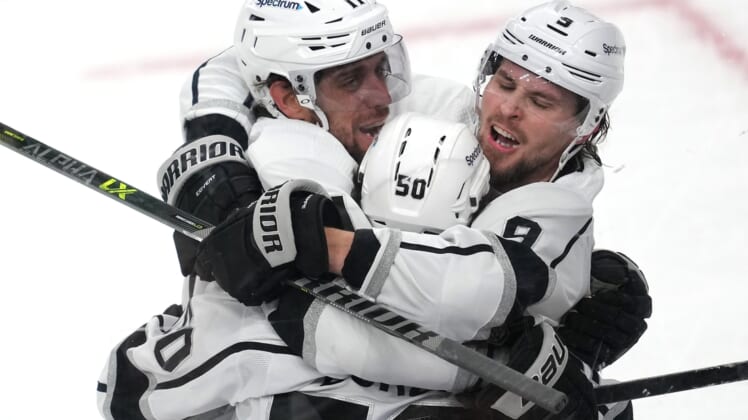 T-Mobile Arena is not an easy place to play in, but the LA Kings didn’t seem to struggle too much, as they gained the two points over the Vegas Golden Knights to keep themselves in a playoff spot for the time being.

The Golden Knights started the game with a 2-0 lead despite a strong start from the Kings, and while this could’ve discouraged the Kings, it didn’t.

“In the past, that was probably enough for us to just scramble through the night,” said head coach Todd McLellan on going down by two in the first period. “We believe we can play against anybody, we believe we can come back. We didn’t have those qualities in the last 15-20 games last season.”

Andreas Athanasiou scored his fifth of the season on a breakaway to give the Kings one goal before the end of the first period.

Early in the second period, Adrian Kempe scored his 20th goal of the season on the power play (yes, the power play) to tie the game. Max Pacioretty scored his second of the night to put the Golden Knights back up, but Phillip Danault tied the game again with a late-period goal.

The third period had some looks go both ways, but neither team scored as the game went to overtime.

In overtime, Anze Kopitar fed Sean Durzi, who used his elite offensive IQ and vision to find Kempe all alone in front for the tap-in to win the game.

With this win, the Kings improve to a 25-17-7 record, and the Golden Knights fall to 28-18-4. The Kings are now tied with the Oilers in points, but Edmonton has one game in hand, giving them the third spot in the Pacific, while LA claims the second wild-card spot.

The Kings are on the back-to-back, as they’ll take on the Arizona Coyotes tomorrow. It’s a big game that they’ll need to take advantage of, considering the tight divisional race.

McLellan praised the entire third-line in the post-game presser, but the quote that stuck out the most was his take on Quinton Byfield.

“Quinton gave himself permission to be a real player tonight,” McLellan said.

Byfield failed to register a point but was second on the entire team in 5v5 expected goals percentage (xG%) with 80.29, behind just Durzi. He also had one shot on goal and one hit through 12:58 of time on ice.

“It’s hard to take them off,” McLellan said on the third line.

2. Athanasiou with a filthy goal

When Athanasiou is cold, he’s a non-factor, but when he’s on the top of his game, he has the potential to be a game-changer, and that’s what he was last night.

“Athanasiou right off the bat asserted himself using his skating,” McLellan told media.

That quote from McLellan is exactly what the Kings need more of from Athanasiou. He is quietly one of the fastest skaters in the NHL, but far too often, we see him striding around, not really doing much of anything.

If the LA Kings want to have success from their third line, they’re going to need Athanasiou to continue doing this.

3. Danault is the gift that keeps on giving

With a goal last night, Danault has eclipsed his former season-high in goals with 14. Remember when Canadiens fans were trying to convince us that he couldn’t score?

Danault now leads all of the NHL in even-strength goals since the beginning of 2022, at 10.

His goal tied up the game, which gave the LA Kings the opportunity to bring it to overtime, and not just steal one point but come out of Las Vegas with two points.