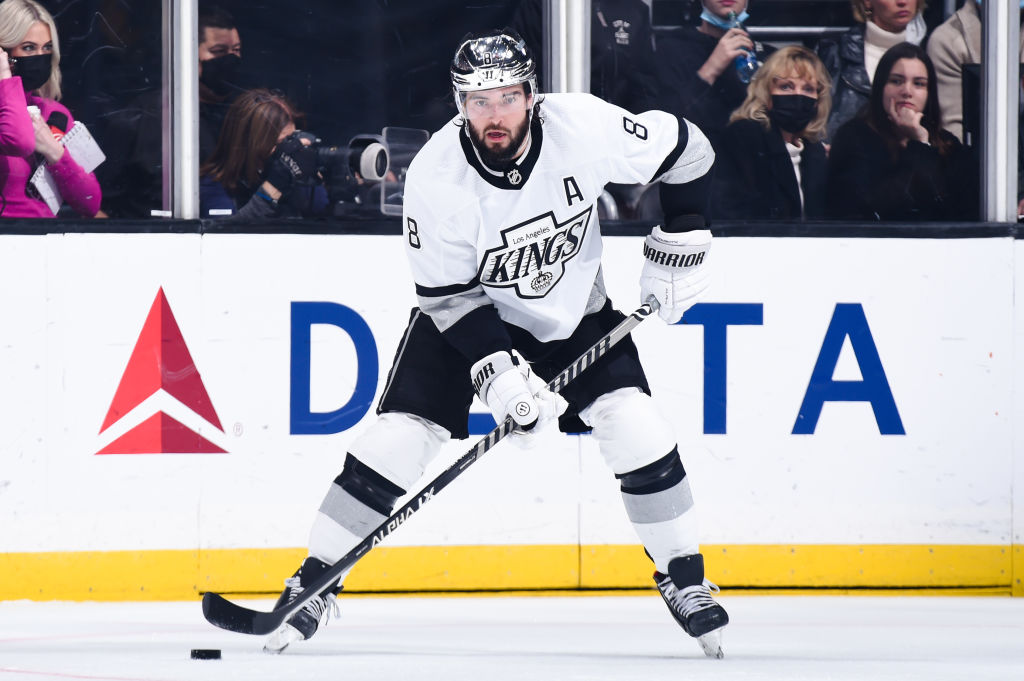 The LA Kings struggled with their execution in Tuesday’s 5-2 loss to the Oilers.

Here were some things that stood out on Tuesday:

The Kings defenseman was honored in front of the home crowd before puck drop for playing in 1,000 career games. Doughty achieved the milestone at the end of January in the team’s 3-2 win at USB Arena over the New York Islanders.

It was good to see Doughty’s family on hand, and the three veterans in Anze Kopitar, Dustin Brown, and Jonathan Quick join in the ceremony. The former Norris Trophy delivered a brief speech to the home crowd and apologized to the Edmonton Oilers for having to sit through it (lol).

Drew out here thanking everyone, even the @EdmontonOilers 😉 pic.twitter.com/OejqdpmAh3

“We’ve talked a lot about this, on the road in New York and prior to today’s game. It was a great ceremony for a great player, he deserves all of that recognition and more,” Kings head coach Todd McLellan said after the game.

2. Arthur Kaliyev gets the Kings on the board

The Kings actually jumped out to a much better start than I had anticipated, especially after not playing for 13 days. However, Edmonton controlled the puck and the offensive zone through the early minutes of the first period before Los Angeles took some of the momentum back.

Arthur Kaliyev was rewarded with his 9th goal of the season after winning a critical board battle moments before, and his tip-in attempt looked like it should have been an easy save for Oilers’ netminder Mike Smith. But alas, 1-0 Kings.

The Oilers evened the score in the second period after Connor McDavid drove to the net. Cal Petersen actually made a great save, despite the former Hart Trophy winner forcing him to open up. However, Mikey Anderson pushed Jesse Pulijarvi into Petersen just as McDavid’s putback attempt crossed the line.

The goal was initially waved off but later changed to a goal on-ice after the officials got together. Toronto reviewed the play, and the goal was upheld.

Video or it doesn’t count:

4. Nugent-Hopkins gives the Oilers the lead

Aside from the opening 54 seconds of the third period, the Edmonton Oilers controlled the puck to swing the momentum back in favor of the visitors. With 12:16 left in the period, Petersen was once again taken out by one of his defenders as Ryan Nugent-Hopkins buried a loose puck from the slot, his 7th goal of the year.

Not long after Nugent-Hopkins gave the Oilers the lead, Phillip Danault evened the score at two goals apiece, tying his career-high in goals (13) in the process.

After Drew Doughty kept the puck in the Kings’ zone, Viktor Arvidsson found Danault from behind the net on this beautiful pass. Also, I’m not quite sure what the Oilers’ defense was doing here.

6. Yamamoto gives the Oilers the lead for good

The Kailer Yamamoto goal looked identical to Danault’s goal, fed from Leon Draisaitl behind the net. The play itself was set up for disaster after Cal Petersen held onto the puck too long, and the Kings couldn’t clear the zone.

From there, Alex Iafallo broke his stick, and after he retrieved a new one, the puck was already down low where Draisaitl did the rest.

Despite focusing on the PP and PK in practice leading up to Tuesday’s game, the LA Kings went 0-for-5 on the man advantage against the Oilers. Admittedly, the effort was much better than in previous games, but much like their 5-on-5 chances, the Kings struggled to finish.

The LA Kings came into this matchup just two points ahead of the Oilers in the standings with a game in hand, but a big two points went to the visitors. Edmonton has now won three straight under interim head coach Jay Woodcroft.

UP NEXT: The Kings will need to re-group for a showdown in Vegas on Friday against Jack Eichel and the Golden Knights.