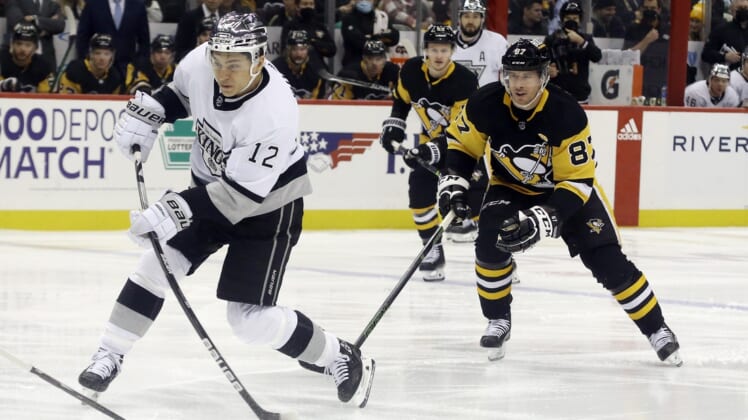 Trevor Moore put a bow on perhaps his best month of hockey in the National Hockey League with a two-goal effort in Sunday’s 4-3 win over the Pittsburgh Penguins. The LA Kings were on the second leg of a back-to-back after falling flat in Philadelphia on Saturday.

The Flyers snapped their 13-game losing streak, and it’s no surprise that the Kings were looking for a better start out of the gate.

“I think having a good start was a point of emphasis in this building,” Moore said. “They have good first periods here, so definitely it was a big key for us.”

The Penguins were one of the hottest teams in the league until recently. Including Sunday, Pittsburgh has now lost three straight games. With the game tied at one goal apiece, Trevor Moore received a stretch pass from Jacob Moverare and made a nice move in tight before roofing the puck past Penguins’ netminder Tristan Jarry to give the LA Kings a 2-1 advantage.

Drew Doughty would add another just over three minutes later in the second period, giving the visitors a two-goal lead heading into the intermission. However, the Penguins, who entered the day with a 13-5-4 home record, battled back to even the score.

“It’s an obvious feeling of, ‘You know, that sucks. They just tied the game,’ Moore added. “But we remained positive, you know, just keep going, keep doing our thing, don’t change anything, and we’d thought that it would lead to success.”

Last year, this group might have folded under the pressure, but there’s a clear difference between last year’s team and this year’s. With just under seven minutes remaining in regulation, Moore hopped over the boards for his next shift. Blake Lizotte, who retrieved the puck in the Kings’ d-zone, spotted the forward with fresh legs, sending a tape-to-tape pass up-ice to Moore, who did the rest.

For the second time on Sunday, Moore beat Jarry one-on-one, this time giving the LA Kings the lead for good.

The undrafted free agent out of the University of Denver has been terrific in January after a slow start to the year. Including Sunday’s two-goal effort, Moore recorded four goals and 12 assists for 16 points this month. The last time a Kings player recorded more than 15 points in a month was Anze Kopitar in March 2018.

A big reason why Moore has been so successful is the consistency of playing on the team’s second line with Viktor Arvidsson and Phillip Danault.

“Fortunate to be playing with those two players,” Moore said. “I think that’s a big factor, we talk a lot, we’re honest with each other about what we want. I think that’s huge when you have guys with different styles of play, you gotta kind of be able to mesh them all together.”

However, Moore looked anything but the player he was last season in the early goings of the 2021-22 campaign. Through the first 32 games, the young forward had just three goals and seven points. Since then, he’s exploded.

“He’s been probably in our top two or three players for the last month now,” Kings’ head coach Todd McLellan said of Moore. “I’ve always said that we have to take some responsibility for his start, and when I say we, I mean the coaching staff. We’ve moved him around, we put him with different people, he was like our swiss-army knife and now he’s found a home. He’s been productive there, that line has an identity and they play extremely well. I never really see Mooresy tired, he’s got an engine that’s second to none. I’m really happy for him and I’m glad that our group has him.”