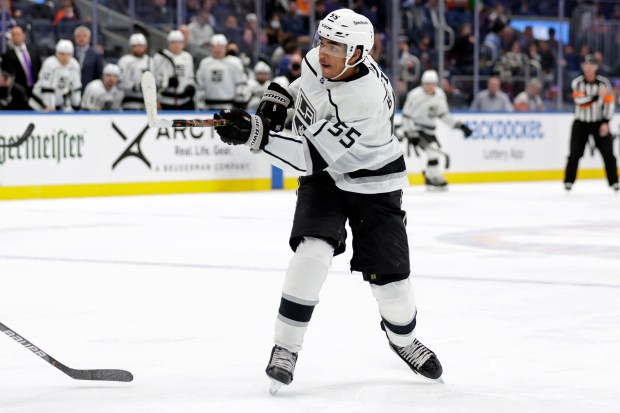 The LA Kings made their way to Elmont to play at the UBS Arena for the first time ever, as they celebrated Drew Doughty‘s 1,000th career regular-season game in the NHL. The team didn’t play their most flawless game, but they managed to squeeze out the win.

Finally, the moment LA Kings fans have been waiting for since the 2020 NHL entry draft, Quinton Byfield has scored his first career goal in the big leagues.

Before tonight, Byfield had looked good despite not registering a point in his three games prior. He had gotten looks on the power play and had looked very engaged in the offense.

Last night, his hard work and effort finally paid off.

In the first period, Byfield got a zone entry and sniped it on Islanders goaltender Semyon Varlamov, glove-side.

While others have been dubbing the young centreman a “bust” already, I think his lack of production has to do with inexperience and age. With guys like Connor McDavid and Auston Matthews, I think NHL fans’ vision of what a regular rookie season “should be have been” is misguided. People seem to place too much on young players’ first and second seasons in the big leagues.

Sometimes it just takes a little bit of an adjustment period, and Byfield is certainly showing that now.

2. Andreas Athanasiou is back

Before last night, Andreas Athanasiou had been out of the lineup since Dec. 14, but it really didn’t look that way in his return.

Athanasiou had a goal and an assist, his second multi-point performance of the season, along with 0.46 expected goals for (xGF).

The Kings have been trying to fix their third line all season long, and by the looks of last night, they may have. Athanasiou compliments Byfield quite well, and Dustin Brown isn’t a bad piece on that line either.

Oh yeah, his goal was an absolute snipe, by the way.

3. Cal Petersen with a strong performance

The Kings went with a somewhat surprising decision last night when they gave Cal Petersen the start in net, but he did a nice job with the opportunity he was given… for the most part.

Petersen played a very strong game for the first 55 minutes until Mat Barzal broke through and ruined his shutout. Shortly after, Matt Martin fed Casey Cizikas in front of the net for another goal to put the Islanders down by one.

The Kings and Petersen ultimately held on. He finished the game with 23 saves, a .920 save percentage, and 0.85 goals saved above expected. That’s a game you should be happy about, but with the way it unfolded late, I doubt he’s satisfied.

The LA Kings are back at it on Saturday with an early 10 am PT puck drop from Philadelphia.