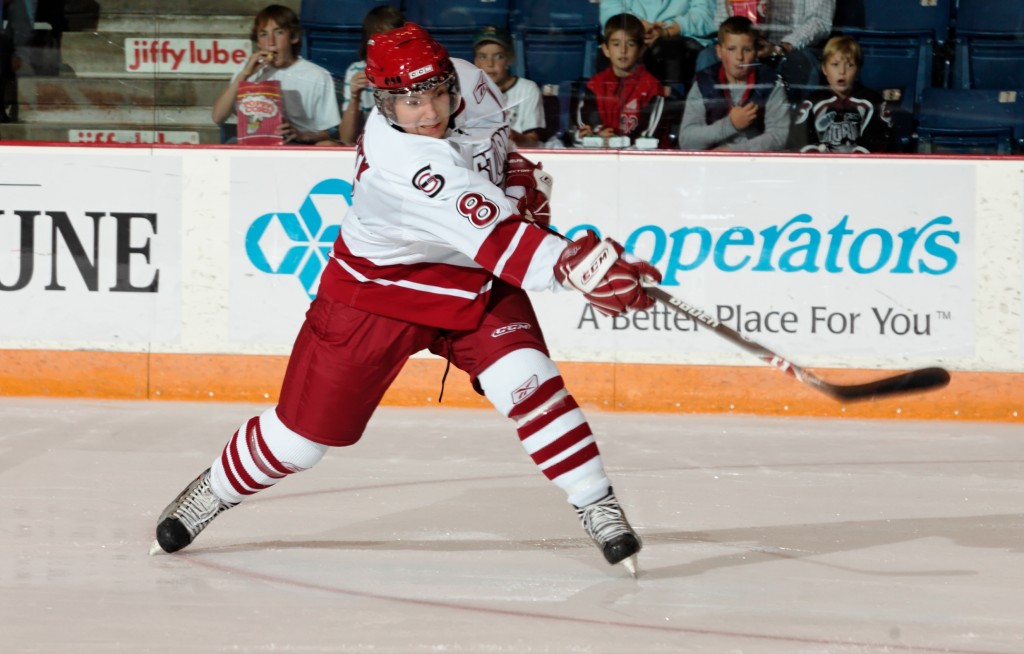 Jason Brooks, who coached Drew Doughty with the OHL’s Guelph Storm, spoke highly of the LA Kings blueliner in celebration of his 1000th game.

On Thursday night, Drew Doughty became the 359th player in NHL history to reach the 1,000-game plateau. However, the LA Kings defenseman joined a more exclusive club, becoming just the 12th player in league history to play 1,000 games for one franchise while missing fewer than 40 games. Just the ability to stay healthy over the course of his 14-year career is enough to celebrate. Of course, in Doughty’s case, that only scratches the surface of what kind of player and what kind of competition he is — something that was evident as far as back as his major-junior days with the OHL‘s Guelph Storm.

Among those celebrating Doughty’s recent accomplishment is Jason Brooks, who was an assistant with the Storm during Doughty’s tenure with the team from 2005 to 2008.

I recently had the pleasure of speaking with Brooks, who fondly reminisced on his time with the future Stanley Cup champion, beginning with what was stood out about the then-15-year-old.

“It was how, as a player, he played above the years,” Brooks noted. “We drafted Drew — he was, I believe, the sixth-overall pick at the time — and he came to our first training camp and was phenomenal. He played above his years, his decision-making, his poise with the puck, his stick-positioning, his defensive awareness. I want to say it was an amazing thing to see because, as a 15-year-old, things are so hard sometimes for these kids to step out of minor hockey and to jump in at such a high level of junior and Drew, he just stepped in and just played exceptional right from the get-go.”

While he was doing his best not to put the proverbial cart before the horse, Brooks couldn’t help but see the long-term outlook for the youngster from London, Ont.

Believe it or not, talent wasn’t what stood out most to Brooks. Instead, it was the youngster’s infectious attitude.

“It felt great when I first spoke to Drew,” Brooks added. “It was just how much fun he had with the game and how much he enjoyed the game and loved playing the game. He was such a fun person to be around. Drew always smiled, he was very carefree in the room, but on the ice, very determined and very driven to be the best player he could be to help lead us each and every night he stepped on the ice.”

A native of Listowel, Ont., Brooks is no stranger to the development of young hockey players. Aside from No. 8, Brooks coached and developed future NHL talents like Dougie Hamilton, Dan Girardi, and Doughty’s future Kings teammate, Dustin Brown. With Doughty, though, there was just something special about his unmatched talent.

“Personally, it was an easy relationship because I hate saying this as a coach, but sometimes watching Drew play, you took things he did and shared it with other players,” Brooks admitted. “He did things so naturally. [What he did as] such a young player was remarkable and trying to get the other guys to see how he did it and buy in– not to say that Drew didn’t have special abilities because when he wanted to put the team on his back, go end-to-end, and score highlight-reel goals — but he took pride in his game.”

The 2007-08 season was a pivotal one, to say the least, for Doughty. He was, after all, building his stock as a top-five pick in the upcoming NHL Draft in Ottawa. Of course, a forward for the OHL’s Sarnia Sting was projected to go number one.

Steven Stamkos was his name, and he and Doughty saw quite a bit of each other that season. Jason Brooks remembers the encounters between the two like it was yesterday.

“We played the Sarnia Sting and Steven Stamkos played for the Sting, and we put Drew on him,” recalled the 45-year-old. “So, I matched Drew, through our head coach Dave Barr, every shift I could against Stamkos. And I just said to Drew, ‘He doesn’t get on the scoreboard.’ I think we played [the Sting] four times that year — two at home; two away — and I think we only gave up one goal to Stammer and it was a power-play goal.”

It was an accomplishment that Doughty thrived on.

“Drew just took so much pride in things like that and when you talk about maturation as a player, to think about somebody who’s going to be drafted as high as Drew went and see what defenseman are like in the game today — so offensive-minded — how Drew accepted and embraced being a defensive player like that, to shut down a weapon like Steven Stamkos, to give us in Guelph a chance to win, it speaks volumes to was like as a player,” Brooks beamed. “But, dealing with [Doughty] one-on-one, it was a bit of a joke because I mean, Drew steps onto the ice and I’m watching him play and I’m going, ‘Holy cow! What am I going to teach you or what can I help you with?’

While he and the Storm were disappointed to lose Doughty’s services in 2008, Brooks was thrilled that the young defenseman was going on to bigger things. He was even more thrilled when he succeeded at the NHL, becoming an all-star, representing Team Canada at the Olympics, twice — and winning gold, twice — and of course, winning two Stanley Cups. But now, as the Kings’ great No. 8 has reached the 1,000-game mark, Brooks could not help but beam in pride for his former defenseman.

“I’m just so proud of his accomplishments as a player,” the coach emphasized. “He was such a great representative of the Guelph Storm and everything he’s done not only on the ice but off the ice. And things he’s done back in Guelph with a box that he had purchased for kids to go watch games– he’s just such a good person. I’m so happy for the successes he’s had, the hard work he’s put in to get there, and it’s all paid off into an amazing career, and I’m just grateful that I had an opportunity to work with him, to say that I got to know him and to watch him continue to succeed.”

Especially after the Tampa Bay Lightning selected Stamkos, the LA Kings taking Drew Doughty was, with all due respect to Zach Bogosian, Alex Pietrangelo, and Luke Schenn — chosen third, fourth, and fifth in 2008, respectively — a no-brainer.

Seldomly had a Kings’ first-round draft pick panned out for the club. Drew Doughty’s emergence, however, was the sign of a new day for the silver-and-black. Not only had he become an NHL regular but became one of the faces of the NHL, accomplishing more than long-suffering fans of the franchise could even dream of.

It may have been a minute since he coached the all-star blueliner but for Jason Brooks, his time with Drew Doughty may as well have been yesterday given how resonant those memories are.

As for his 1,000th game, it was a successful one for Drew Doughty.

The Kings, thanks in part to Quinton Byfield and his first-career NHL goal, edged the New York Islanders by a 3-2 count at UBS Arena — the club’s maiden trip to the new facility.

It’s 1,000 games down for Drew Doughty and many more to come: just one of his laundry list of achievements.