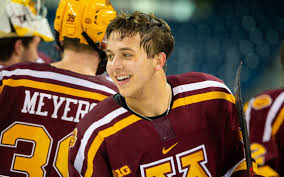 Earlier this week, LA Kings prospect Brock Faber spoke to the media about being named to the US Olympic team.

Who says you can’t turn a negative into a positive? Among others, LA Kings prospect Brock Faber certainly can.

Coming off the disappointment of having the World Juniors canceled, the University of Minnesota product had no time to dwell on the news. After all, a short time later, he was named to the United States Olympic team headed for Beijing.

While still in Minnesota, Faber took some time this past Monday to speak with the media. He was asked, via Zoom, about being named to the Olympic team, the disappointment of the World Juniors cancelation, and the support he’s received from the LA Kings.

“Obviously, it’s hard to put into words how excited I am,” Faber emphasized about being named to the Olympic team. “It’s a dream come true. Growing up, watching the Miracle on Ice about 50 times a year, it feels like. You know, you don’t really understand how special it is until, obviously, you get asked to go, and then it’s all the emotions kind of rushing in. It’s hard to put into words. It’s super exciting.”

As for not having the time to dwell on the World Juniors stoppage, the 19-year-old had received word of the possibility of representing his native country on the world’s biggest stage — with all due respect to the aforementioned tournament. While it wasn’t yet made official, Faber and two of his teammates were nonetheless looking forward to better days.

“[Team USA GM] John Vanbiesbrouck pulled me, Matty Beniers, and Jake Sanderson aside at the World Juniors, and as soon as he said ‘Olympics,’ it was kind of, like, your heart almost drops with excitement,” Faber reflected. “It wasn’t a question. Obviously, this is a once-in-a-lifetime opportunity and, you know, we’re going to get over there and represent this country as best we can.”

Though the Olympics were on the horizon, there wasn’t any denying how disappointing the cancelation of the World Juniors was. It was an especially bitter pill to swallow for Team USA. The red, white and blue were vying to defend their gold medal from the previous year.

“It was tough,” Faber admitted. “We had a really special group there. Very special. And it sucks the way it [ended] but what can you do? You know, you move on.”

For the young defenseman and company, it was back to business and a sense of comfort being back at Minnesota.

“We came home the next day and we’re able to be back with the guys here and see the coaches here, friends, family here,” Faber said. “Obviously, it’s tough but you look on the bright side, take the positives from it. It is what it is. You can’t control it anymore, so you move on.”

As for who he’ll be playing with, Faber will be representing Team USA with Golden Gopher teammates Ben Meyers and Matt Knies as well as some key names he became familiar with at last year’s World Juniors.

“I mean, I’d say about half the team I’ve obviously played against or played with. obviously pretty familiar with Kniesy and Benny,” noted the blueliner. “And then, Jake Sanderson and Matty Beniers, I played with them at the World Juniors and NTDP, so– you know, I’m familiar with a lot of the guys. There are a few older guys that I’ve never met or played against, — I’m obviously a lot younger than them — but, you know, we’re going to get there, we’re going to get a tight group going as soon as possible, and hopefully, get some chemistry as early as possible.”

As exhilarating as the chance of competing at the Olympics is, the upcoming Games comes with the proverbial elephant in the room.

COVID-19, thanks to the recent Omicron variant, continues to play a significant role in the sports world. Faber was asked whether he had to take a step back and analyze everything before accepting to represent his country.

The Kings have shown a plethora of support for Faber since drafting him in 2020, this occasion is no exception.

“Yeah. I mean, there was a lot of congratulations, texts, made a Zoom call just to kind of talk about it and they’re obviously just as excited for me and they’ve been great to me,” Faber emphasized. “Coming to the games, you know, always pumping my tires. They’ve been awesome for me, and they’ve definitely reached out and given me congratulations. I’m definitely thankful to have them in my corner.”

Many fans may still be disappointed that no NHL players will be going to Beijing next month. However, no NHL by no means translates to no excitement and, certainly, no talent. Team USA’s roster alone should suffice against such an argument. As for the Kings specifically, it’s an opportunity for the organization and the fans to see what one of their future stars can do on the world stage. Heck, even former Kings products Nick Shore and Brian O’Neill will be playing for Team USA as well for those who were fans of either during their days with the silver-and-black.

Overall, it promises to be a great tournament. For Brock Faber, though, he hopes to capitalize on his maiden Olympiad by adding Olympic gold to his trophy case.

Team USA opens the Olympic tournament on Feb. 10 against Germany.