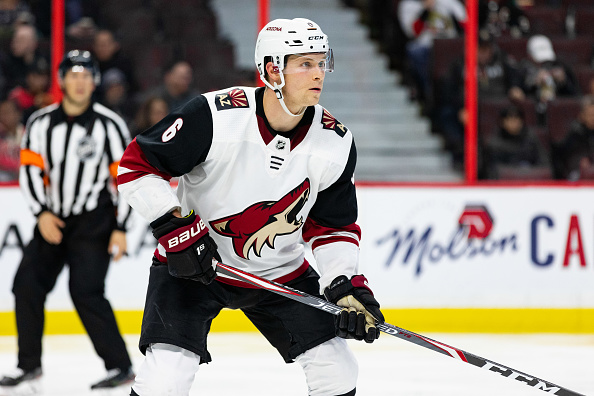 The LA Kings have turned the corner in their rebuild, and the addition of a dynamic, left-shot D-man should be their next priority.

LA Kings general manager Rob Blake recently said that he would put his team in a position to succeed, noting the March 21 trade deadline could be a good opportunity to do just that.

“I fully anticipate moves going forward will have impacts on the roster to make us better,” he said.

Blake has made it well-known that he’s in the market for a dynamic, left-shot defenseman to provide more offense from the backend. And after a 1-5-1 to start the year, the Kings have rebounded remarkably, sitting within striking distance of the top spot in the Pacific Division. They’ve turned the corner of their rebuild.

These three defensemen should be on Blake’s radar heading toward the trade deadline.

Perhaps the most obvious one, right? Jakob Chychrun to the LA Kings makes too much sense not only because he fills an organizational need, but he’s still a couple of years from entering his prime.

Chychrun is on a very bad team, and his plus-minus and point production have been dragged down because of it. The former 16th overall pick in 2016 is shooting the puck at an uncharacteristically low 2.3%, which is way down from the 10.2% last year and his career average of 6.9% coming into this season.

Chychrun had a breakout campaign in the shortened 56-game schedule last season, racking up 18 goals and a career-best 41 points. Further, he paced all NHL defensemen in goals-per-60 minutes (minimum 100 TOI):

The 23-year-old is under contract for another three seasons after this year at a very team-friendly $4.6M AAV. Yes, the price tag will be a lot to acquire Chychrun, but the Kings have the assets to get a deal like this done.

For those concerned about his lack of production this season, let’s look back at his production leading up to last year’s breakout campaign in terms of points per 60 minutes:

Again, I attribute the dip to the lack of talent around him. The Coyotes finished nine points (54) out of a playoff spot in the Honda West Division in 2020-21. This year, they are on pace to finish with fewer points (52) over a full 82-game slate.

If not Chychrun, then who? Well, let’s look to the east coast for help, specifically in Philadelphia. After underachieving last year, the Flyers haven’t shown any signs that the rest of this season will be any different, so they could look to offload a couple of larger contracts.

Philadelphia is flirting with a rebuild, and one player that could become available is 25-year-old Ivan Provorov.

The former seventh overall pick in 2015 enjoyed a breakout campaign during the 2017-18 season, tallying 17 goals and 41 points while playing in all 82 games. The following year, he saw his point total drop to 26 while his shot percentage was nearly cut in half. Provorov bounced back in 2019-20, racking up 13 goals and 36 points.

But like his team, he underachieved last season, reaching 26 points for the second time in three seasons. He has four goals and 14 points through 36 games this year, including four points on the man advantage while his shot percentage is hovering around his career norm.

As noted, the Flyers’ alternate captain carries a $6.75M cap hit through 2024-25, so the LA Kings would have him for just as long as Chychrun before becoming an unrestricted free agent.

Has anyone benefited more from a change of scenery than Shayne Gostisbehere? Perhaps more impressive, “Ghost” is having a bounceback year in Arizona. Yeah, that team. The 28-year-old defenseman had a whirlwind 2020-21 season, being placed on waivers at the end of March before being traded to the Coyotes in July.

Through 38 games, Ghost has seven goals and 24 points and has already surpassed the last two years’ point totals. Further, he’s sixth in the league among NHL defensemen who have played in at least 100 minutes TOI in goals-per-60 minutes:

For reference, Ghost was at a 0.22 G/60 rate average in his last three seasons in Philadelphia before the spike this year.

While he has yet to score a goal on the man advantage this year, he’s a threat on the power-play, which is something the LA Kings could use right now.

During the 2017-18 season, he tallied a career-best seven power-play goals while finishing 10th in the Norris Trophy voting.

In terms of his contract, Ghost is under team control for another year beyond this one at a $4.5M cap hit before becoming an unrestricted free agent. A little less control, but perhaps less to give up in terms of a package the other way.

Another Flyers defenseman to target, Travis Sanheim is just 25 years of age, but he doesn’t provide as much offense as the three players mentioned above. Last year, the 17th overall pick in 2014 tallied three goals and 15 points to along with a -22, again, on an underachieving Philadelphia club.

Through 37 games this season, the 6-foot-3 defenseman has two goals and nine assists. He’s not really utilized much on the power-play anymore, shooting the puck at an average 3.5% shot rate over the last two seasons. Sanheim is under contract for another year at a $4.7M cap hit before becoming a UFA.

After reaching the Stanley Cup Finals last year, the Montreal Canadiens have been perhaps the most disappointing team this season. They’ve already fired their general manager in Marc Bergevin, who took on an advisory role in Los Angeles, so there is some familiarity with Ben Chiarot.

The knock on Chiarot is his age. He’s already 30 years old, and he will be a UFA at the end of the year. However, if the Kings make a move for him, they likely wouldn’t have to give up as much as some of these other names. If the price tag is too much, they could just simply wait for the offseason and sign him.

In terms of numbers, the 6-foot-3, 226-pound defenseman has five goals and eight points through 35 games. This coming on the heels of a seven-point season in 41 games last year, although he missed some time with a fractured hand.

Will he or won’t he be available? Rumors surfaced earlier this season that the Avalanche could be shopping Samuel Girard to make room for Bowen Byram. However, TSN’s Pierre LeBrun shot down the rumor despite the logjam on the Colorado roster.

That said, if the LA Kings presented an enticing offer for Colorado, I am sure that Avs general manager Joe Sakic would be open to the idea. Girard is just 23 years old, and he’s such a difference-maker offensively. In 35 games this year, the former 47th overall pick in 2016 has four goals and 17 assists for 21 points.

He’s utilized quite heavily on the power-play, which would be a plus for Los Angeles. Regarding contract, Girard is locked in at a $5M AAV through the 2026-27 season, including a modified NTC beginning in 2024-25. While not impossible, the LA Kings’ offer would have to blow the Avs away.