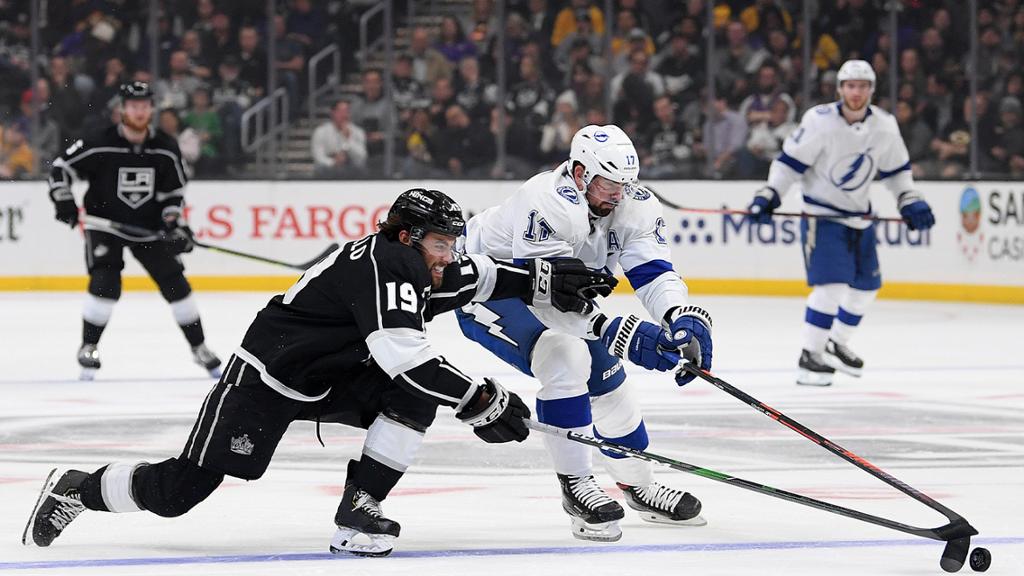 The LA Kings took the Lightning to overtime in their last matchup on December 14.

1. Put the Sharks game in the rear-view mirror

The Kings saw their four-game winning streak come to an end on Monday afternoon. Not only did they lose the game, but Todd McLellan’s group was flat-out embarrassed in San Jose. Los Angeles had no answer for Timo Meier, who made history, tallying the first five-goal game in franchise history.

As has been the theme for most of the season, the Kings vastly outshot the Sharks, but the home team capitalized on just about every one of their chances. The timing of Tuesday’s game is both good and bad because the Kings can quickly put Monday’s game in the rear-view, but they have a difficult task at hand, hosting the Tampa Bay Lightning.

“Get some rest and put this behind us,” McLellan said after Monday’s game. “If we drag bad habits or we sulk, we’ll be in trouble tomorrow, we know who we’re playing against. Let’s move on.”

The Kings have generally played well against the top teams in the league, so I would expect a hard-fought game.

A strength last year, the Kings’ penalty kill has been atrocious this season, sitting at 74.3% coming into Tuesday. Los Angeles allowed two more power-play goals in Monday’s loss and have now given up 11 goals over their last 36 penalty kill opportunities.

“The first one, they obviously made a nice play through the seam, and usually when the puck goes through the seam like that, it’s a good chance there will be a grade-A scoring chance, very good odds for the puck to go in,” McLellan commented of the Sharks’ power-play conversions. “The second one, hats off to Timo (Meier), he picked the corner, he obviously found the spot.”

The Lightning have allowed just four power-play goals over their last 10 games (35 chances), but they’ve also only converted on just three of their chances over that same stretch. The Kings’ power-play could have another tough night, but Tuesday will be a good opportunity for the penalty kill to get back on track.

3. Who steps up offensively without Adrian Kempe?

In the first game without Adrian Kempe, the Kings put up 40+ shots on goal for the second time in three games. The difference was that they had just two goals to show for it, unlike the six scored against the Penguins last week.

Kempe, 25, has been a big part of the team’s offense this season, setting a new career-high in goals (17), but he’s sidelined for at least the next two games as well.

McLellan noted that he would make adjustments to the Kings’ top line if necessary and no offense to Samuel Fagemo, of course, but the experience just isn’t there for him to be a reliable scorer each and every night. He played well in just his second NHL game, but the Kings need to find some offense.

Depending on Andreas Athanasiou‘s availability, there could be the potential for some line shuffling to get established scoring threats flanking Anze Kopitar. It may not be a bad idea to recall Martin Frk from Ontario for Tuesday night’s game. He did score on the power-play against Nashville, after all.

The LA Kings and Lightning will get underway at Crypto.com Arena, with puck drop set for 7:30 pm PT.