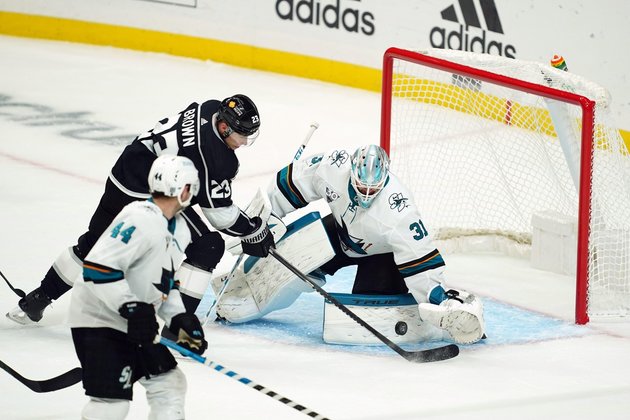 In a Monday matinee game, the LA Kings will face their Pacific Division rival San Jose Sharks for the first time this season.

The first meeting of the 2021-22 season between the LA Kings and San Jose Sharks should be a competitive matchup, with both teams within striking distance of the top spot in the Pacific.

Here are five things to keep an eye on this afternoon:

The only Pacific Division opponent the LA Kings have yet to see, the Sharks have been significantly better than previous seasons. San Jose comes into this game with a 20-17-2 record and sits in fourth place in the division with a game in hand to the rivals to the south.

The Kings weren’t very good against San Jose in the shortened 56-game schedule last year, going 2-5-1 in the eight contests. The Sharks jumped out a 4-0-0 record this season before hitting some turbulence. And since December 1, they’ve gone 8-8-1. Over that same stretch, Los Angeles has gone 11-5-1.

The Kings have been surging toward the top of the Pacific Division, and a win at SAP Center would continue their remarkable turnaround since the 1-5-1 start to the season.

The primary points producers in San Jose have come from Timo Meier (40), Tomas Hertl (31), Logan Couture (30), and Brent Burns (26). However, the Sharks have iced a fair amount of first-year players this season, actually the most in the league.

William Eklund started the year with the NHL club before being returned to Djurgarden of the Swedish Hockey League. Jonathan Dahlen has been perhaps the best story on San Jose, who is enjoying a breakout rookie season as a 24-year-old.

The Swedish forward was originally the 42nd overall pick in the 2016 NHL Draft by the Ottawa Senators. He was traded to Vancouver in February 2017 and, eventually, to San Jose in 2019. Through 34 games this year, Dahlen has eight goals and 16 points while averaging 15:06 time-on-ice.

3. Burns-Karlsson back together on Sharks power-play

After declaring the Burns-Karlsson pairing a mistake back in October, the Sharks are seemingly going to give it another go as the duo were given the green light in Saturday’s overtime loss to the Penguins. The move came in an effort to stop the 2-for-24 power-play stretch San Jose was stuck in.

In fact, since December 11, the Sharks have allowed more short-handed goals (3) than power-play goals.

“I think the ability to have Ryan Merkley play on the other unit, I like him up top,” Sharks head coach Bob Boughner said via Mercury News. “So that might allow us to have Burns and (Karlsson) on the same unit, which we’ve tried in the past and we’ve had mediocre success with it.

“But at the end of the day, if you get those two out there (with Hertl, Couture, and Meier), you’ve got your five best players on the ice, and it’s up to them, they’ve got to get it done.”

Despite the personnel adjustment, the Sharks went 0-for-4 on Saturday. The Kings’ penalty kill hasn’t been great this season, allowing another goal in Saturday’s win in Seattle.

After four years in Arizona, goaltender Adin Hill is enjoying another strong season, owning a .906 SV% and a 2.73 GAA in 20 starts with San Jose. However, 33-year-old James Reimer has been another good story for the Sharks.

After being traded from the Maple Leafs to San Jose at the trade deadline in 2015-16, Reimer went on to play with Florida and Carolina before signing a two-year contract to return to the Sharks this past offseason. In 19 starts, he has a .916 SV%, 2.68 GAA, and 3.60 goals-saved-above-average (GSAA) mark.

Reimer hasn’t played since January 6, sidelined with a lower-body injury, but it sounds like he could be in line for his first start in quite some time on Monday.

5. Lineup changes with Kempe in protocol

On the LA Kings side, they took a significant hit when forward Adrian Kempe went into COVID protocol on Sunday. The 25-year-old is enjoying a career year, scoring a career-high 17 goals, but he’s likely to miss all three games this week under the minimum five-day isolation period.

That said, Samuel Fagemo stepped into his place in the line rushes in Sunday’s practice.

“We’re going to start with a plan, and it’s going to be flexible,” LA Kings head coach Todd McLellan said to the media on Sunday. “Obviously, that’s a really important line for us, play a lot of minutes and in a lot of different situations, usually against the other team’s top lines. So, we’re asking a lot of whoever goes there. We’ll start a certain way and adjust if needed.”

Based on that statement, it doesn’t sound like Fagemo is THE guy to replace Kempe. Perhaps someone like Arthur Kaliyev gets elevated from the fourth line to the top line, flanking Anze Kopitar and giving that line a true sniper.

The LA Kings and Sharks will get underway from SAP Center at 1 pm PT.

Drew Doughty deserves to be an All-Star this year