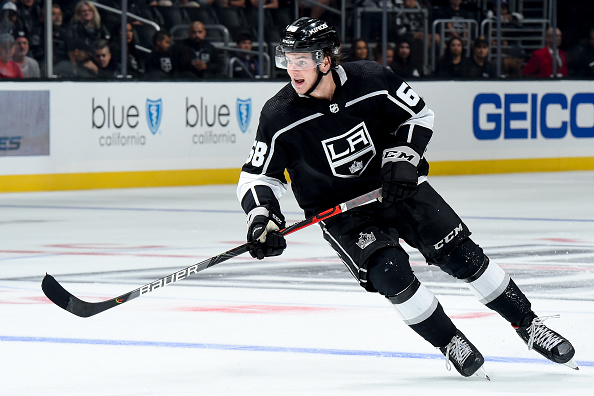 With Brendan Lemieux sidelined because of a non-COVID illness, Samuel Fagemo slotted into his spot on the LA Kings‘ fourth line on Thursday night. Fagemo, 21, was previously recalled from the Ontario Reign but had yet to make his NHL debut.

Overall, I thought he looked assertive with the puck on his stick and was responsible in the Kings’ d-zone.

“It was such a great feeling,” the Swedish forward said of the moment. “It was such a dream come true and a big day for my family and me as well. It was just so fun.

“I found out around 10:30 in the morning today. I had practice with the Reign this morning so it happened quick and I just focused on the game and went back home and ate and slept so it’s been a busy day for sure,” he added.

Todd McLellan offered similar sentiments as what I noted:

“I thought he played tremendously,” the Kings’ bench boss said confidently. “He woke up this morning practicing with the Reign, had no time to think about his first night, very little time to phone family and friends and he had a tremendous game, he played well. Couple good scoring opportunities, pretty responsible all over, good night for him.”

Congratulations to forward Samuel Fagemo who is making his @NHL debut tonight pic.twitter.com/laWq2DfNFq

Now, it will be interesting to see if he can somehow stick in the lineup on Saturday against the Seattle Kraken, assuming Lemieux is healthy enough to return.

Here’s ⁦@LAKings⁩ defenseman Sean Durzi’s 2nd assist of the night on a great pass from the point. Sean’s puck movement, skill and hockey IQ is off the charts. pic.twitter.com/8IcWRgEx34

“Scoring game one gave me a little more confidence to play, I’d say throughout game one, it was a lot better,” Durzi said in the postgame presser. “I think I’ve had the belief that I could play in this league for a little while now, even before I was called up.”