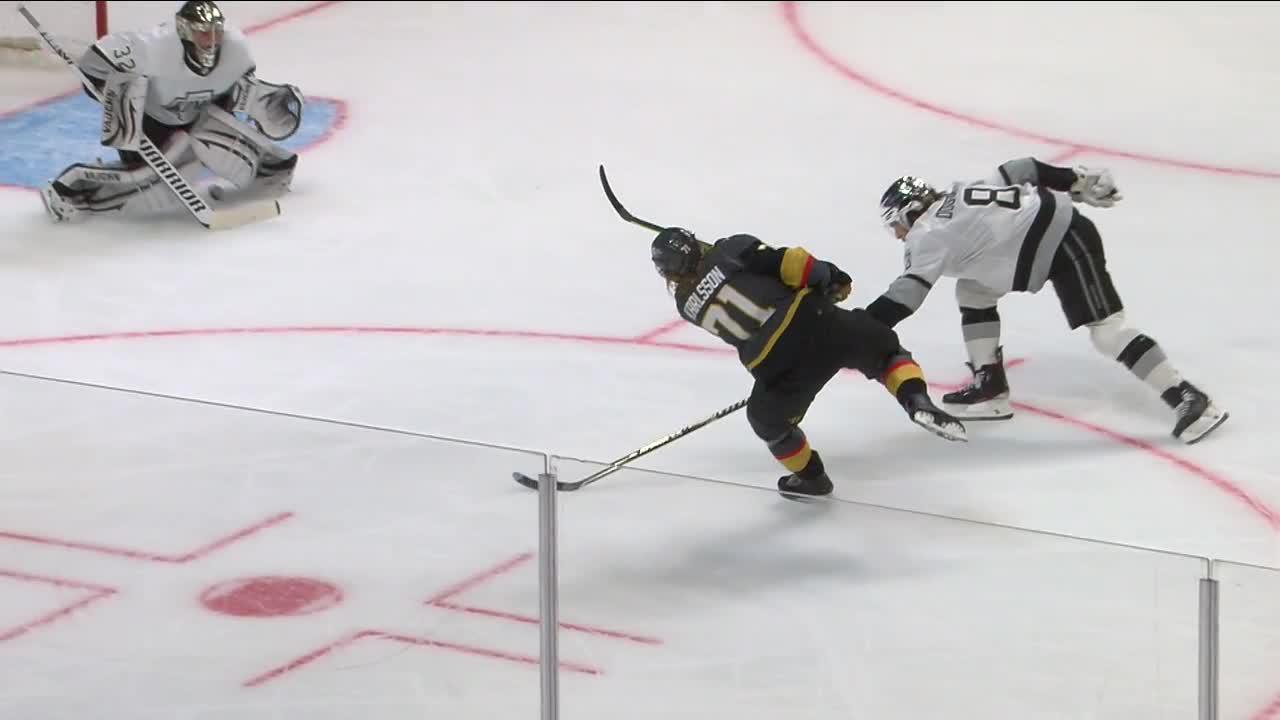 The LA Kings played their first game since COVID-19 halted the season for the Christmas break, and it was not pretty. They fell to the Vegas Golden Knights, a division rival, by the score of 6-3.

1. Anderson and Doughty have worst night of the season

For the majority of this season, it’s been pleasant to watch the pairing of Drew Doughty and Mikey Anderson work their magic, but last night was disastrous and most definitely the duo’s worst outing of the season.

Doughty and Anderson both finished below 50% in expected goals percentage using Money Puck’s model, as the duo allowed 2.39 expected goals when they were on the ice.

Anderson was the evident worse of the two. He never really looked comfortable out there from the get-go, and his mishaps led to multiple goals. Doughty was also the cause for the Golden Knights’ sixth and final goal, as he turned it over right to Jonathan Marchessault in front of the net (while Anderson left him unmarked, I may add).

I wouldn’t expect them to continue playing this poorly. As we all know, they’ve been very consistently good throughout the season. But just a very poor performance by them.

Christian Wolanin and Matt Roy were the team’s best pairing by far last night. They weren’t in on the offense crazily, but they allowed very minimal chances against. Their poise was something that was greatly appreciated in what was otherwise a very poor team effort.

Roy specifically had a nice play when he sauced it up in the air ahead to Trevor Moore for a breakaway goal. It reminded me of that Erik Karlsson to Mike Hoffman play in the 2017 postseason. Filthy. Wolanin wasn’t noticeable outside of a couple of offensive zone keeps, but that’s good for a role defenseman like himself. Unnoticeable means he wasn’t turning over the puck or allowing bad opportunities.

For Wolanin, it’ll be important to continue this with consistency. If the LA Kings don’t make a move for a left defenseman during the season, he’ll have the opportunity to battle it out with Olli Maatta for that regular lineup spot, and if he plays how he did last night, I think he can grab it.

3. Goaltenders not at fault

Yeah, six goals were allowed, but it really wasn’t Jonathan Quick nor Garret Sparks‘ fault that the Kings were beat down last night.

The team had no momentum from the get-go and just let Vegas pound on them early. While I’ll admit, Quick looked shaky at times, falling a little too often. He was still making the saves that you’d expect from him. A lot of the goals allowed by him were due to unmarked players by the LA Kings around the front of the net.

Former Golden Knight Garret Sparks is replacing Quick in net for the Kings.

As for Sparks, he looked calm. He did his job and weathered the storm as the backup goaltender, saving 11 of 12 shots to record a .917 save percentage and 0.42 goals saved above expected (GSAx). It’s unfortunate that this team already has two capable NHL-caliber goaltenders. Otherwise, Sparks would have had a chance to compete for a role in the NHL with the way he has played. Alas, at least he’s bringing up his stock as a player. He’ll get a chance somewhere.

All in all, just an unfortunately rough game for the Kings. They need to be better when they host the Vancouver Canucks on Thursday, another Pacific Division rival.