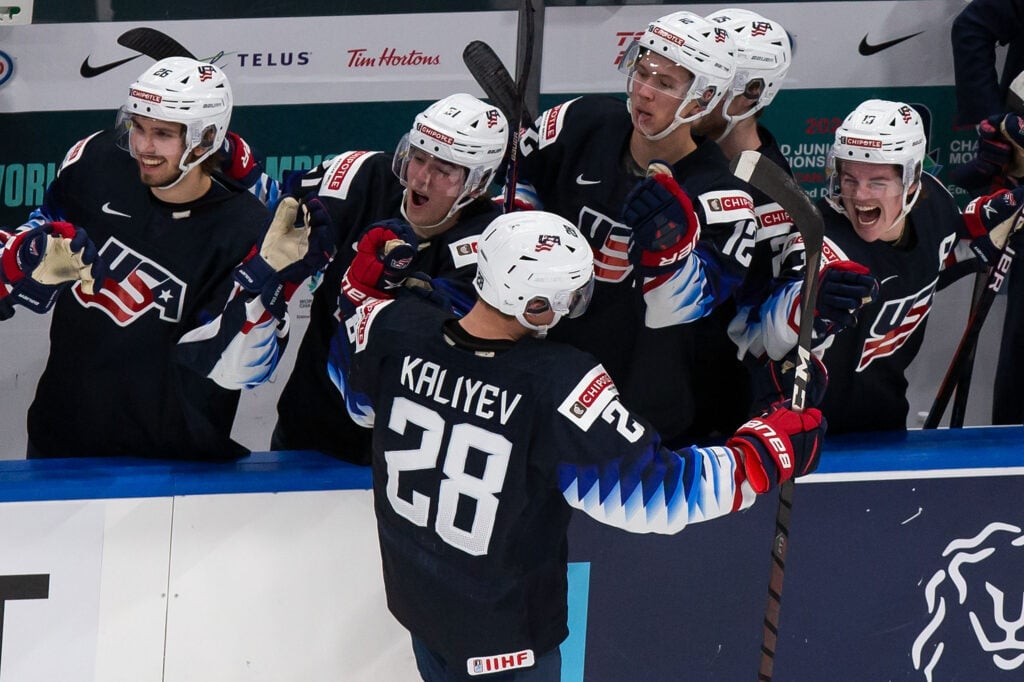 Alex Turcotte looks like he will be making his NHL debut, and putting him on a line with Arthur Kaliyev makes sense for both players.

Alex Turcotte and Arthur Kaliyev were taken 28 picks apart at the 2019 NHL Draft by the LA Kings, with Turcotte being selected at 5th overall and Kaliyev 33rd. Kaliyev’s number, however, isn’t indicative of his potential, both then and now.

He was expected to go higher in the Draft, and, so far, he has developed his play away from the puck, and his shot rivals the perennial top goal scorers in the league.

Alongside Lemieux and Lizotte, he has played well but is not getting the ice time he needs to showcase all of his talents. This could change if the decision is made to put the newly called-up Turcotte with Kaliyev on the same line.

Turcotte and Kaliyev have a history of working well together for the betterment of each team they have played for. In the 2021 IIHF World Junior Championship, they played on the same line, each having three goals and five assists.

Despite often being overshadowed by Duck’s phenom Trevor Zegras, Turcotte and Kaliyev more than held their own, with Turcotte eventually scoring the gold medal-winning goal in a decisive US win against Canada.

The duo also found success playing a substantial amount of time together in Ontario. so it would be logical to reunite them now. They have already fulfilled the Kings’ plan of developing talent and chemistry between youngsters in the AHL before moving them up to the NHL.

Turcotte and Kaliyev were not only drafted together, but they also improved into an effective pair both defensively and offensively.

McLellan’s take on Turcotte reflects the potential in one of his rookies, “When he’s been able to play, his game’s been a very consistent two-way game. He’s a player that is an energy type player, he’s involved in everything. He strips a lot of pucks, creates turnovers for his teammates, and we’ll be looking for that. How is he defensively, is he able to read things quicker and close things quicker? But by all indications, his play there has been deserving of his recall at this point.”

With Philip Danault and Quinton Byfield still in COVID protocols, Alex Turcotte is finally getting his shot to play in the NHL. However, it won’t be easy as he is slated to fill in the 2C role and make his debut against one of the best teams in the West, the Vegas Golden Knights.

Having Arthur Kaliyev on his wing would give him a sense of familiarity going into his debut and support his style of play.

During recent practices, Turcotte was skating alongside Trevor Moore and Viktor Arvidsson. It would be advantageous for Moore to switch lines with Kaliyev because of the success Turcotte has with him as well as the fact that Arthur Kaliyev is tied for fourth on the team in goals, even though he is receiving bottom-six minutes.

The more often you have Kaliyev’s lethal shot on the ice, the better for not only Turcotte but also the entire team as well. Unfortunately, COVID protocols have temporarily taken many Kings’ players off the ice, but the silver lining is that it may give the LA Kings youngsters time to shine.