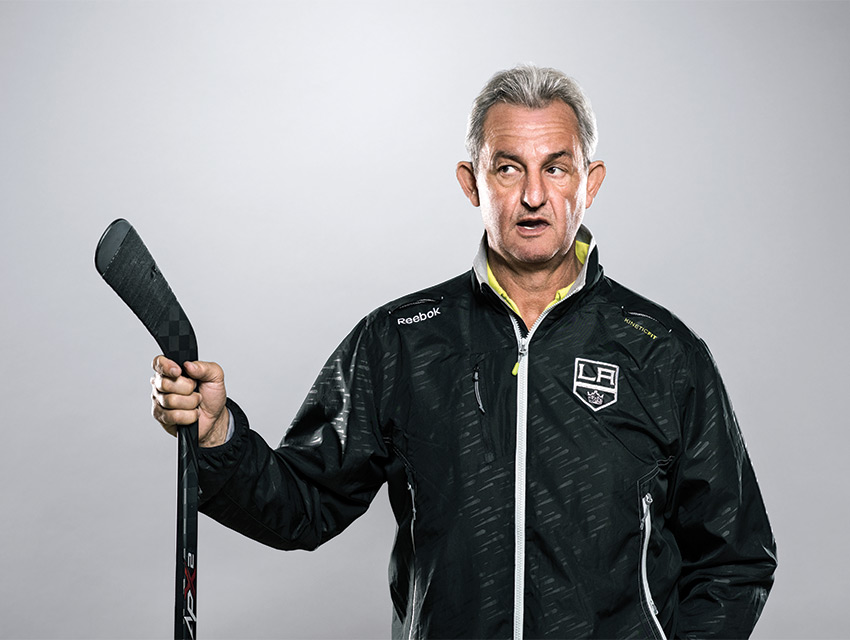 With his return to STAPLES Center on Thursday, we reflect on and celebrate Darryl Sutter’s legacy with the LA Kings.

When he was brought to Los Angeles in late 2011, Darryl Sutter’s arrival came with its share of reluctance, its share of ambivalence. After all, while they were beginning a new era of sorts behind the bench, the LA Kings were now counting on a Stanley Cup-less coach to lead them to the proverbial Promised Land.

In a short amount of time, however, Darryl Sutter changed the culture in the City of Angels.

Here was a roster full of players eager to reach the top minus the right coach to lead them there. However, even though he didn’t have a Stanley Cup to his name at that juncture, Sutter had nonetheless earned himself a resonant track record which included guiding the 2003-04 Calgary Flames to an unlikely, albeit well-deserved, berth in the Cup Final – the club’s first since 1989. Yet, while Sutter and the Flames fell one game short of capturing hockey’s Holy Grail, the veteran bench boss had put his stamp on what was already a celebrated career behind the bench.

So, when he joined the Kings eight years later, things began to change.

The offensive woes continued, granted, but the defensive prowess elevated. As for in goal, Jonathan Quick put up unheard-of numbers (1.95 GAA, .929 save percentage, 10 shutouts), helping the penultimately ranked offense squeak into the playoffs – on the final weekend of the season, no less.

As expected, the Kings, who clinched the eighth and final playoff spot in the Western Conference, weren’t given a fighting chance by the so-called experts.

Suddenly, the silver-and-black’s offense came to life before ousting the defending Western Conference champions, the high-powered Vancouver Canucks in five games. But, the Kings weren’t content to eliminate the top seed.
They then swept the second-seeded St. Louis Blues and then the third-seeded Phoenix Coyotes to reach their first Stanley Cup Final since 1993.

Not even the New Jersey Devils, led by hockey’s winningest goaltender, Martin Brodeur, could slow the Kings down as they needed six games to win their, and Sutter’s, first-ever Stanley Cup.

Sutter would then guide the Kings to another Cup win in 2014, capping off the greatest period in Kings history – and even one of the greatest in modern hockey history: an achievement that likely would not have been without the services and the contributions of one Darryl Sutter.

While some could argue that he wore out his welcome in later years, no one can deny both the short- and long-term impact that Mr. Sutter had on the LA Kings.

For long-suffering fans of the silver-and-black, 2012 will forever live in their hearts, as will 2014, and the unprecedented roads it took to win in both years.

In 2012, the Kings became the first, and only eighth-seeded team to eliminate each of the top three seeds in their conference; and in 2014, the Kings won three Game 7’s on the road, with the first capping off a rare 0-3 series comeback.

On Thursday night, the LA Kings welcome Darryl Sutter back to STAPLES Center for the first time as an opposing coach since his tenure with the club ended.

Given that he is now coaching, and succeeding with, an old divisional rival in the Calgary Flames, Mr. Sutter’s return may take a backseat to the task at hand for the home team: trying to defeat one of the league’s hottest teams. Nevertheless, Mr. Sutter’s tenure in Los Angeles was a momentous one – one that has, and will continue to, resonate with the LA Kings and their ever-loyal fanbase from all parts of the globe.

Renewing hostilities may overshadow a time to reflect and celebrate his contributions on Thursday night, but that does not mean that Darryl Sutter is not deserving of said reflection and celebration.

His tough-as-nails coaching style complemented a deep roster that included future Hall-of-Famers Anze Kopitar, Drew Doughty, and the aforementioned Jonathan Quick; his rapier-like wit in press conferences satisfied media and fans alike; and his legacy forever altered a once-hard-luck but always-proud franchise. So, regardless of Thursday’s outcome – and whatever events occur en route – let us fondly remember what Darryl Sutter did for the LA Kings and how he helped turn the LA Kings into a championship winner.

Mr. Sutter, while it may not be necessarily evident on Thursday evening, we thank you.

LA Kings: Brandt Clarke will not be invited to WJC Team Canada camp