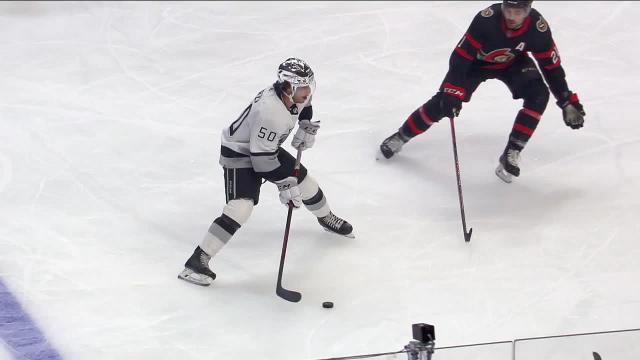 The LA Kings ended their five-game losing streak with a 4-2 win over the Ottawa Senators on Saturday night.

The LA Kings got back into the win column on Saturday with a 4-2 win over the Senators.

The Kings came out of the gates with a sense of purpose, playing fast and aggressive. Viktor Arvidsson had a great chance within the first couple of minutes, taking the puck to the net and creating chaos in front. The play eventually resulted in Alex Iafallo ringing one off the post from the slot. Dustin Brown, who was bumped back up to the top line in advance of this game, also hit the post later in the period.

Los Angeles dominated the first 15 minutes of play, in large part because they had three powerplay opportunities. After scoring in his NHL debut, Sean Durzi was featured on the first powerplay unit. The 23-year-old recorded a secondary assist on Arvidsson’s redirection off the stick of Anze Kopitar to give the Kings the early 1-0 advantage.

Great response to a backbreaking goal

Despite dominating most of the first period, Ottawa tied the game with 18.9 seconds remaining after Michael Del Zotto‘s shot was partially blocked by Alex Iafallo’s stick but still got past Cal Petersen.

Into the middle frame. Ottawa generated the first seven shots of the second period before the Kings tallied their 21st shot overall. However, the Kings re-took the lead after an awkward sequence in front of the Ottawa net.

Carl Grundstrom had his stick lifted on a shot, but Senators’ Zach Sanford pushed the Kings’ forward into his own goaltender while the puck went into the net. The goal was reviewed and upheld.

Grundstrom’s goal seemed to give the Kings a ton of confidence as Arthur Kaliyev tallied his first goal and point since November 5, redirecting a shot from Alex Edler off his stick and his skate and into the Ottawa net.

Petersen hasn’t been particularly sharp in the early goings of this season, compared to his breakout campaign a year ago. Credit where credit is due, though, he made a fantastic save on a 2-on-0 shorthanded opportunity for Ottawa in the first period, but he probably would like to have the Connor Brown goal back.

Brendan Lemieux took exception to two Senators players, including Brady Tkachuk, for pushing Blake Lizotte after the puck was frozen. Lemieux and Tkachuk ended up wrestling to the ground with the latter claiming that the former bit him.

After a review, Lemieux was assessed a five-minute match major, giving the Senators a lengthy powerplay with 6:09 remaining in regulation.

Collectively, the Kings did a great job of killing off the major penalty, with Petersen making a couple of timely saves, Phillip Danault coming up with a big shot block, and Alex Iafallo creating a shorthanded scoring opportunity. Big moment in the game and everyone chipped in.

Grundstrom finished off the game with an empty-netter, ending the Kings’ losing streak.

The Kings are back at it on Tuesday against the Ducks, with puck drop set for 7:30 pm PT.