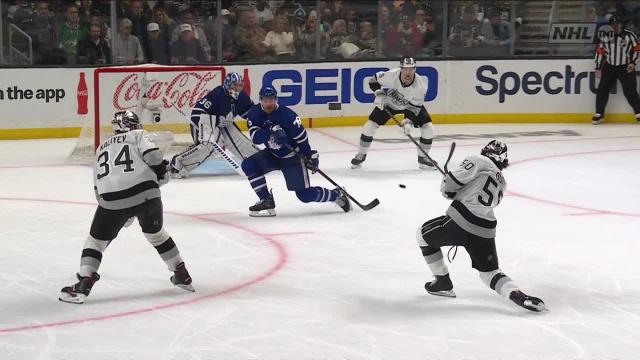 The LA Kings fell 6-2 to the Maple Leafs on Wednesday, but defenseman Sean Durzi scored his first NHL goal.

While the LA Kings were blown out on Wednesday against the Toronto Maple Leafs, extending their losing streak to five games, defenseman Sean Durzi recorded both his first NHL point and goal. The 23-year-old assisted on Viktor Arvidsson‘s goal early in the second period, tying the game at one apiece.

However, the Leafs would score four goals in the middle frame, making it a 5-1 lead. Into the third period, Durzi wristed a beautiful shot from the high slot past Leafs’ netminder Jack Campbell on the powerplay for his first career goal.

Sean Durzi with the bar down beauty for his first NHL goal! What a moment against his hometown team!#GoKingsGo pic.twitter.com/v8aNmpENqU

With the tally, Durzi became the first Kings’ defenseman to score a goal in his NHL debut since John English did so with the franchise back in 1988.

Also, good on Arthur Kaliyev to immediately grab the puck for his teammate.

“Yeah, it was nice. Obviously garbage time in the hockey game, but to get it out of the way was good,” the former Maple Leaf said. “I thought there was a lot to clean up, but it’s a good feeling.

“Unfortunately for Durz, the emotional component to his goal was minimal, because of when it happened and the score of the game,” Kings’ head coach Todd McLellan said of the moment. “I’ll give our guys credit, they were all excited for him, they were, the bench was all standing, guys were excited, but it would’ve been so much better for him as an individual if it was 3-2 or whatever it might be. Really happy for him, we all are, but the emotional investment into the goal wasn’t as great as it could have been.”

Solo lap for Sean Durzi! He will make his NHL debut tonight.#GoKingsGo pic.twitter.com/EvhfKcumDz

If your mom doesn't happy cry when you score your first NHL goal, it doesn't count. Isn't that right, @SeanDurzi? pic.twitter.com/7XEo51MPDh

LAK Goal – Durz!! There's your positive from tonight. Sean Durzi makes his NHL debut, gets his first NHL assist and now his first NHL goal. Terrific moment, on a tough game for the team.

With his first goal tonight, Sean Durzi becomes the first @LAKings' defenseman since John English in 1988 to score a goal in his NHL debut.#LAKings #GoKingsGo pic.twitter.com/cLeo8vIiBx

First NHL goal for Sean Durzi is a nice moment in an otherwise awful night for the Kings.

Sean Durzi scored his 1st NHL goal on the PP, along with 1 assist for a multi-point debut in the NHL. pic.twitter.com/NozGmjho8B

What a night for #LAKings rookie D Sean Durzi. First #NHL assist and point, and he also scores his first NHL goal. All in his first NHL game. Congrats to @seandurzi!

Cool moment for Kings D Sean Durzi, who gets the primary assist on LA's first goal in his NHL debut vs Toronto. Durzi is from Mississauga and he was drafted by the Leafs in 2018 before they traded him to LA in the deal for Jake Muzzin.

The Kings are off until Saturday, hosting the Ottawa Senators, with puck drop at 4 pm PT.