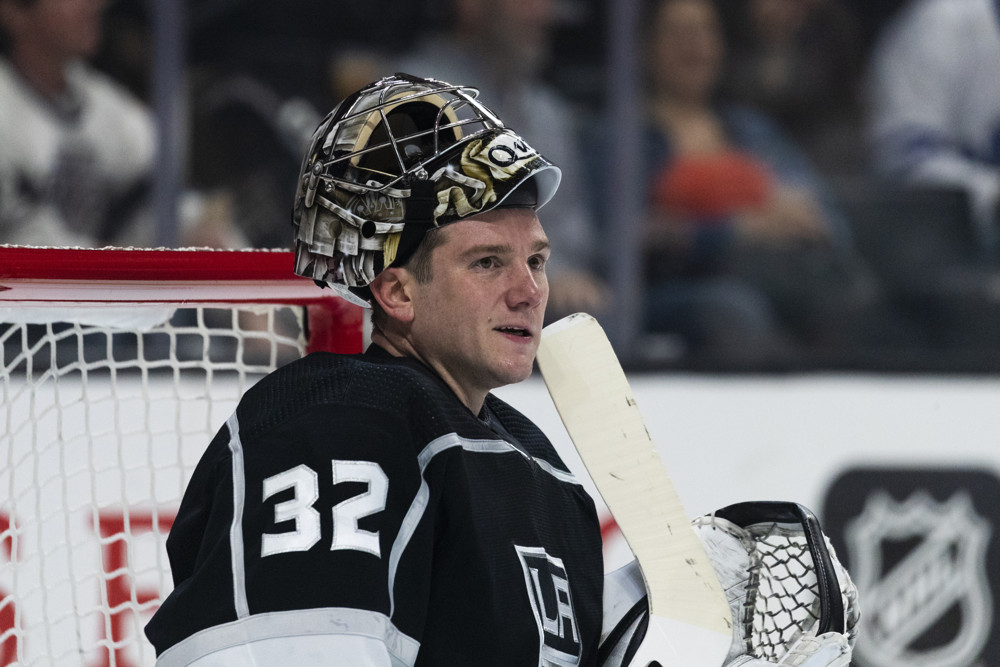 Jonathan Quick spoke to the media on Tuesday, touching on his leadership and how it continues to benefit the LA Kings.

In recent years, Cal Petersen has established himself as a bona fide NHL talent between the pipes. After this past summer, though, with his three-year extension in hand, it appeared as though Petersen was going to be the LA Kings‘ No. 1 goaltender for the foreseeable future. But, what about the silver-and-black’s longtime starter, Jonathan Quick?

When the 2020-21 season drew to a close, Jonathan Quick looked to be finishing up arguably the greatest career of any Kings netminder. While his decorated past speaks for itself, the present and the future for the 2012 Conn Smythe winner appeared to be bleak, at best. So, while he still has two years remaining on his current contract, Quick no longer seemed like the Kings’ priority between the pipes. After all, from being unprotected in this past summer’s Expansion Draft to riding the bench for his team’s season-opener last month, Quick’s best days in a Kings uniform appeared to be in the rearview mirror.

But, not so fast.

While his 4-4-2 record may not look like much on paper, Quick’s 1.88 goals-against average and .939 save percentage certainly do. But, while his numbers are certainly noteworthy in themselves, they almost pale in comparison to Quick’s leadership.

He may not be the most vocal or enthusiastic of netminders, but Quick has nonetheless made his mark as a leader, showing off said skills by example — through his astonishing compete level and his unwavering work ethic — to become what he is to the LA Kings.

On Tuesday, Quick spoke to the media about his leadership skills.

“I think you have to have some of those qualities in order to be a goalie in this league,” said the 35-year-old. “Players rely on you on a daily basis. Whether you’re playing 70 games or 30 games — 30 games is still a lot — that can make or break your playoff chances. You have to be on when you’re in. I think, just by what the position entails, you have to have some of that leadership in you. That’s not necessarily saying stuff in the locker room or pumping guys up or anything like that, it’s how you play and coming in and competing.”

For those who called to have Quick traded by now, they may have to retract those wishes. After all, while he may be on the proverbial back-nine of his career at 35, Quick has nonetheless proven that he’s still as valuable as he was when he became the club’s starter in 2008-09. He may have lost a step or two, granted, but the Umass-Amherst alum certainly remains competitive while still playing a mentorship role for the aforementioned Petersen.

As for Quick’s leadership, it has not gone unnoticed.

“He’s an awesome leader,” Phillip Danault emphasized. “You can tell why he’s been in the league for a long time and you can tell why he’s won two Cups, too. He’s a great veteran for us and I’m happy to know that guy. He’s very good off the ice with me, and good on the ice. He competes every day here, he’s very athletic, as well. He’s a good leader for us.”

Kings’ head coach Todd McLellan also sees, and respects, the leadership skills that his veteran netminder brings to the table. Whether you’re looking at his numbers, his tenure, or his raw talent, to suggest that Jonathan Quick’s presence bears great importance to his team is quite the understatement. But, it is this that has helped the club’s coaching staff — not to mention their on-ice success — and it has not gone unappreciated.

“[It’s] the way [leaders] carry themselves in the locker room, the way they react to situations, the way they behave around their teammates, are they buying or selling what the coaches are trying to apply,” McLellan noted. “That’s all-important, and these Hall-of-Fame goaltenders have that. They have a way of unifying a group and bringing the message all-together. Quickie is that guy.”

While some may be inclined to press the panic button when they see Cal Petersen’s 2021-22 numbers thus far (3.12 GAA, .889 save percentage), they can at least count on Jonathan Quick to help mentor the younger netminder and guide him in the right direction, especially in the event where Quick and the Kings do part ways.

Until then, the Kings’ No. 32 is sticking around and he is making the absolute best of his time.

Skeptics may point out that we’re not even through the second month of the season yet, suggesting that it’s far too early to laud Quick for his achievements thus far. It may still be early in the season, granted, but it is as evident as the nose on someone’s face that the veteran netminder has responded to adversity but working his tail off and getting results — which includes a hard-earned shutout. So, the next time anyone is inclined to doubt him, let us remember that Jonathan Quick’s leadership skills alone continue to make him an integral part of the LA Kings and their vast success.

Sean Durzi back up with LA Kings, on track for NHL debut vs Leafs