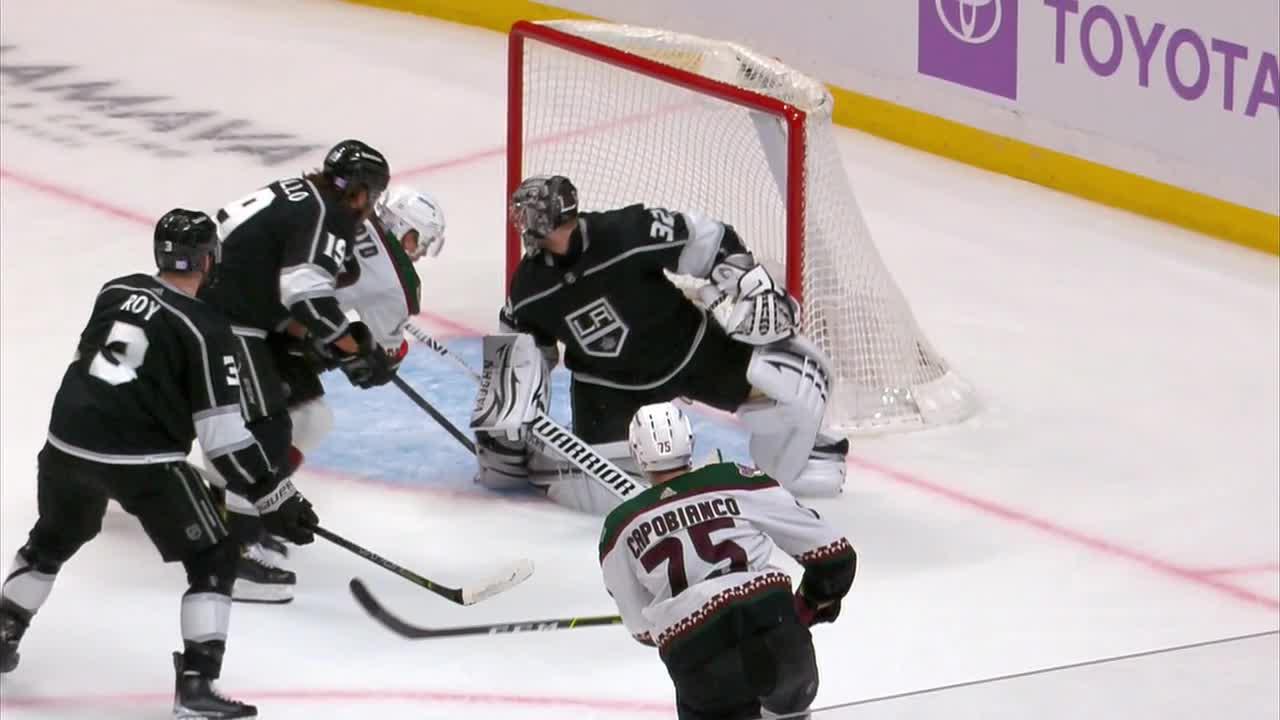 The LA Kings lost their fourth straight game, falling 2-1 in overtime to the Arizona Coyotes on Sunday.

A seven-game win streak now turned into a four-game losing streak; the LA Kings lost against the worst team in the NHL at home on Sunday night. Los Angeles had no shortage of opportunities, and they should have scored about four goals in this one. Unfortunately, they could only get one on the board.

Before diving into the takeaways, this was maybe one of the worst officiated games I’ve seen. The embellishment call on Rasmus Kupari was horrible, and Brendan Lemieux getting called for interference looked like it should have been called on Jakob Chychrun.

How good has this fourth line been lately, specifically Brendan Lemieux? The 25-year-old tallied his fourth goal of the year and all over a six-game span. Blake Lizotte did the dirty work on the play, attracting a lot of attention as he darted toward the slot. No sooner had he received the pass, Lemieux snapped a wrist shot past Karel Vejmelka.

“It was all Lizzo [Lizotte],” Lemieux said between periods. “He just made a good play on the backcheck, was able to strip the guy, come out with complete possession and just made a nice pass over to me and I just shot the puck.”

He almost had another goal later in the game on what would have perhaps been a goal of the year candidate within the organization on a stretch pass from Anze Kopitar, but Lemieux’s attempt hit the post.

The Kings had perhaps the best shot volume on the man advantage this season, but they couldn’t get any pucks past Vejmelka. Todd McLellan‘s group went 0-for-3 on the powerplay, keeping the puck in the o-zone for nearly the full two minutes on the last opportunity. Still, someone has to step up and start finishing. For starters, the Kings need a body in front of the net. Way too many clean looks led to easy saves for Arizona.

Looking back to the Senators’ game near the end of the road trip, the Kings have gone 1 for their last 12 on the man advantage, with the lone tally coming in that Ottawa game. We knew losing their top two quarterbacks on the man advantage in Drew Doughty and Sean Walker would have an impact, but the Kings are struggling mightily on the powerplay right now.

This game would have been perfect for defenseman Sean Durzi to draw into the lineup to help out in this area. The 23-year-old had three goals in 12 games on the man advantage with the Ontario Reign prior to his call-up. Let’s see if the Toronto, Ontario native draws in on Wednesday against the Leafs.

“I felt better about our power play,” Todd McLellan said. “A full two minutes in the zone, a lot of movement, some looks. That’s the best two minutes we’ve had in a while on the power play. Despite not scoring, which I think is your point, when you get down on that, I thought it gave us a little bit of life.”

Karel Vejmelka came into the game with a 0-9-1 record and a -6.66 GSAx, but he stopped 37-of-38 shots sent his way. Again, the Kings gave him way too many clean looks, but the Arizona netminder also made a few key saves. The Kings have now dropped their first three games of the seven-game homestand.

On paper, the Capitals and Hurricanes looked like tough matchups, but the Kings looked competitive in both. But the Coyotes had just three wins on the season and started their backup goaltender. It should have been a game to “get right.” Instead, this team is still looking for answers in the scoring department after an offensive outburst against Carolina.

“I thought we played really well in Winnipeg, I thought the two games against the top teams from out east we played very well in,” McLellan said. “Tonight, it was a frustrating night because of the amount of chances that we created. We’d probably be talking a different story if we had some finish, but we didn’t. Tonight’s a tough one to evaluate. The chances were there, it’s disappointing.”

The Kings will have a few days off before hosting the Toronto Maple Leafs on Wednesday, a team they topped 5-1 at Scotiabank Arena in October.