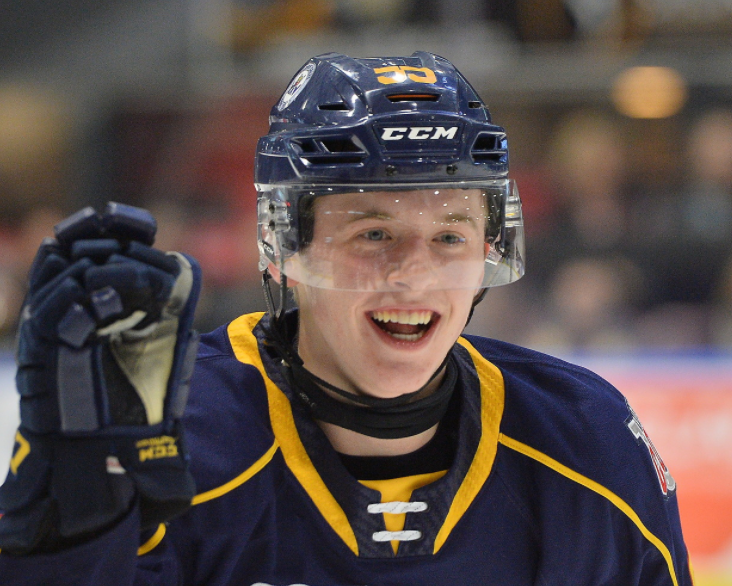 While relatively quiet, the LA Kings’ OHL contingent was present this weekend, helping their teams to victory.

Another week in the OHL has come and gone, and here is what the LA Kings‘ OHL contingent had to show for themselves.

It was a relatively quiet week for Martin Chromiak, although he did help the Kingston Frontenacs win two of their three games this past week.

While he was held pointless on Tuesday in Ottawa and on Saturday at home against Mississauga, Chromiak did score a goal and added an assist on Friday night, en route to a 6-4 defeat at the hands of the Oshawa Generals.

Overall this past week, the 19-year-old finished with a minus-four rating, 12 shots on goal, and went 0-for-1 in the faceoff circle.

After the week that was, Chromiak and the Frontenacs improve to 8-4-2, tied with the Hamilton Bulldogs with 18 points for second in the OHL’s East Division. They sit just three points behind Ottawa for first.

The Kitchener Rangers had a hectic weekend with three games in as many days. However, while they lost on Friday, the Rangers picked up victories on Saturday and Sunday in Flint and Saginaw, respectively, with captain Francesco Pinelli helping out.

While he may have only had one assist this past weekend, Pinelli, the LA Kings’ second-round draft choice from 2021, continued his exceptional leadership, helping the Rangers reverse their struggle ways from just a couple of weeks ago.

As for the Rangers, they sit third in the Midwest Division, three points behind second-place Guelph and seven behind first-place London.

As was the case the previous week, the Barrie Colts played just two games this past week: a 7-4 win in Niagara on Friday and a 5-4 overtime loss at home against Peterborough on Saturday.

As for Kings prospect Brandt Clarke, he collected assists on both — a total of two this weekend. The 18-year-old, however, provided more than his points. Clarke continues to quarterback a promising defensive corps for the Colts, tallying a plus-three rating this week to go in hand with nine shots on goal.

Clarke and the Colts are now tied for second with Mississauga with 16 points in the Central Division. They sit just three points out of first, which is occupied by the North Bay Battalion.

🚨⏮ We kept it rolling last night against the IceDogs#BackInTheSaddle pic.twitter.com/SkUesSIC7O

Overall, a quieter week for the LA Kings’ OHL contingent. Plenty more hockey left to be played, though, so let’s see what the prospects have in store this week.

LA Kings: A lineup in flux with players getting healthy