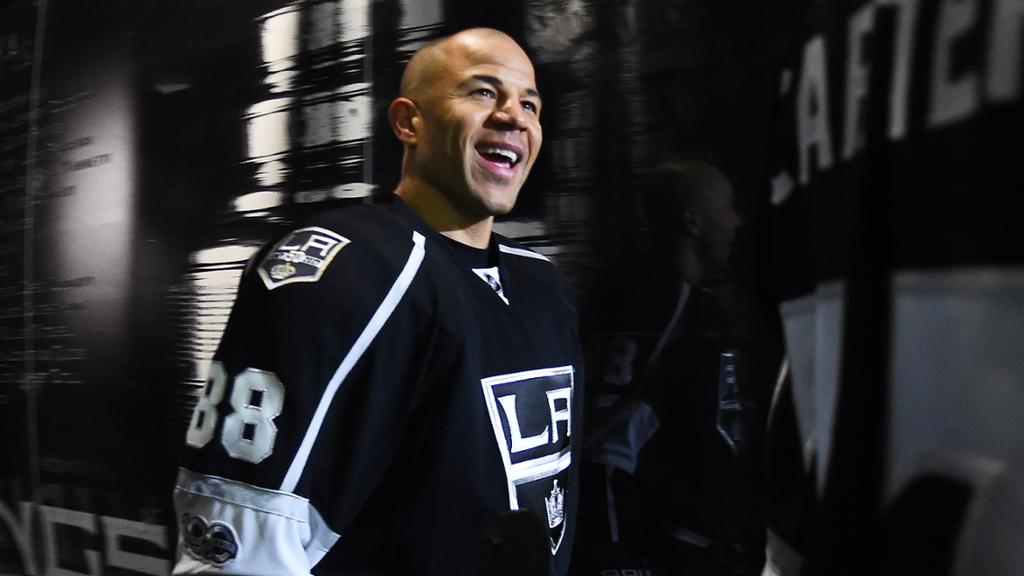 This weekend, the hockey world is celebrating its 2020-21 class of Hockey Hall of Fame inductees. Among those is former LA Kings forward Jarome Iginla.

When we think of Jarome Iginla, donning an LA Kings uniform is admittedly near the bottom of the list. That is no detriment to the Kings, of course, but rather a testament to Mr. Iginla’s illustrious career in hockey, which more notably included his contributions to the Calgary Flames and on the international stage for his native Canada. Nevertheless, Iginla’s tenure in Los Angeles — all 19 games — warrants some discussion.

This weekend, the hockey world is celebrating its 2020-21 Hall of Fame Induction Class, which includes Iginla.

In 1554 NHL games, Iginla scored 625 goals and 675 assists for 1300 points, was a four-time All-Star, winning the Art Ross and Ted Lindsay awards, and, on two occasions, the Rocket Richard Trophy as the NHL’s leading goal-scorer.

In what is certainly a unique year with the postponement of last year’s induction weekend due to COVID-19, this year’s class is especially excited to enter hockey’s Holiest shrine. However, if there was any frustration of having their induction delayed a year, the inductees all did an admirable job of concealing it. That goes especially for Iginla who, as was the case during his playing career, spoke with a big smile on his face, showcasing his superb storytelling skills while making eye contact with everyone listening.

As a matter of fact, I had the honour of speaking with the new Hall-of-Famer about his time in Los Angeles.

“Oh yeah, I really enjoyed it,” Iginla emphasized. “Part of it as a player, part of it as a fan, and part of just learning, is to see how different organizations do things. They have amazing people there like Rob Blake, [who] I got to play with — what a nice guy; Luc Robitaille, what a nice guy. When we went [to Los Angeles], we were trying to get into the playoffs. We were close and then– we didn’t make it, but it was neat to get to play with [Anze] Kopitar and [I had already played with Drew] Doughty [in 2010 for Team Canada] but to see him again [was great].”

However, the former Flames captain didn’t have the greatest memories of all of his Kings teammates.

“[Jonathan] Quick, I didn’t know him but he stoned me a lot — one of the harder goalies to score against, oh my God, he never gave up on pucks,” an amused Iginla reminisced. “But, then also to see the setting: the beach and stuff. I never would have guessed it was like that, and how you can make it– you always think, ‘Oh, you’re not going to be focused,’ or whatever, and there it was. And how they go straight to the rink on the game day, but otherwise not. So, I thought it was it was really– I enjoyed it. I wish we obviously made the playoffs, but oh well.”

When he was acquired by the Kings late in the 2016-17 season, Iginla was excited to join a team poised to make the playoffs — and one just three years removed from a Stanley Cup victory.

Being traded from the Colorado Avalanche, Iginla was part of a team on the rise. In 2016-17, however, the Avs had already been mathematically eliminated from the postseason — ultimately finishing 46 points out of a playoff spot. So, for the then-39-year-old and in his 20th NHL season, Iginla had one last chance to win hockey’s Holiest prize.

“The game, it’s so fun to play,” the 44-year-old began. “The games that weren’t as fun, I didn’t really love exhibition games because nothing on the line and I didn’t really love the games when we were eliminated. So, to get the chance to go from Colorado where we were out to be in the mix again was really cool. I would have been disappointed with a month or two months, or a month-and-a-half of just playing [out the schedule]. And I know my body was breaking down — it wasn’t much coming [to play] just all meaningless games [with Colorado]. So, there were some fun games [with the Kings]. We were in the mix. We had a neat one in Calgary where we won a close one there are the playoffs, Nashville, one of my first games [with the Kings]– so, it was cool. And it was neat to play in STAPLES Center, one of my favorite places.”

In his 19 games for the Kings, Iginla played very well, scoring six goals and adding three assists. The end result may not have come in the form of a playoff spot — the Kings finished eight points shy — but Iggy had fun in the City of Angels nonetheless.

Part of the reason why Iginla enjoyed his brief time with the Kings, however, was reuniting with a familiar face: his former Flames coach, Darryl Sutter.

“Darryl, I thought he mellowed out a little bit,” Iginla recalled. “People were, like, ‘Oh yeah, he’s pretty mellow,’ and I’m thinking, ‘Well, maybe it was 10 years earlier or whatever, but I think he did mellow out a little compared to–‘. When I had him [in Calgary], I know he’s not mellow — like, I know it’s not like ‘Oh, he’s just laid back,’ it was just a little bit of that was a little– and, you know, [the Kings] had won the two Cups so that probably helped. He’s a great coach and motivator, and I think he balances out well with the motivational side, but also with the details of it. So, I was definitely happy to go [to Los Angeles] and get a chance to try to make [the playoffs] and be in the mix.”

We hear the adage “It couldn’t happen to a nicer person,” so often, it can border on being an annoying cliche for some. However, cliches are just that because they’re accurate — and this particular adage couldn’t be more fitting for Jarome Iginla.

Whether he was playing for your team or against your team or whether he was goalless for your team or scored a hat-trick against your team, Jarome Iginla was a consummate professional through and through, maintaining consistency with his affable, heck, even loveable persona, leaving the most ardent of rival fans hard-pressed to find a reason to even mildly dislike the man and the player. Throughout his playing career, this weekend in Toronto, and many years from now, Mr. Iginla has, does, and will forever wear his badge as one of hockey’s great ambassadors with honour. After all, for each team he suited up for — the Calgary Flames, Pittsburgh Penguins, Boston Bruins, Colorado Avalanche, and Los Angeles — Jarome Iginla made them better, bringing a significant amount of skill, leadership, and professionalism that is, frankly, unparalleled.

From helping Team Canada erase their half-century Olympic gold drought to leading the once hard-luck Calgary Flames to Game 7 of the 2004 Stanley Cup Final, to winning Canada’s first World Cup months later, to another Olympic gold in 2010, these achievements only scratch the surface of what Jarome Iginla means the sport of hockey.

From humble beginnings to all-star status to now being a Hockey-Hall-of-Famer, it could be argued that Mr. Iginla has ample reason to become arrogant. But, if this weekend is any indication, and it is, the Edmonton native continues to be the same personable, down-to-earth gentleman that he was when he first broke into the NHL 25 years ago.

On this momentous weekend, Iginla joins an induction class that includes Kim St. Pierre, Ken Holland, Doug Wilson, Kevin Lowe, and Marian Hossa — each as deserving as the next. So, along with the rest of the 2020-21 class, we pay homage to Jarome Iginla and congratulate him on an honor very well-deserved.