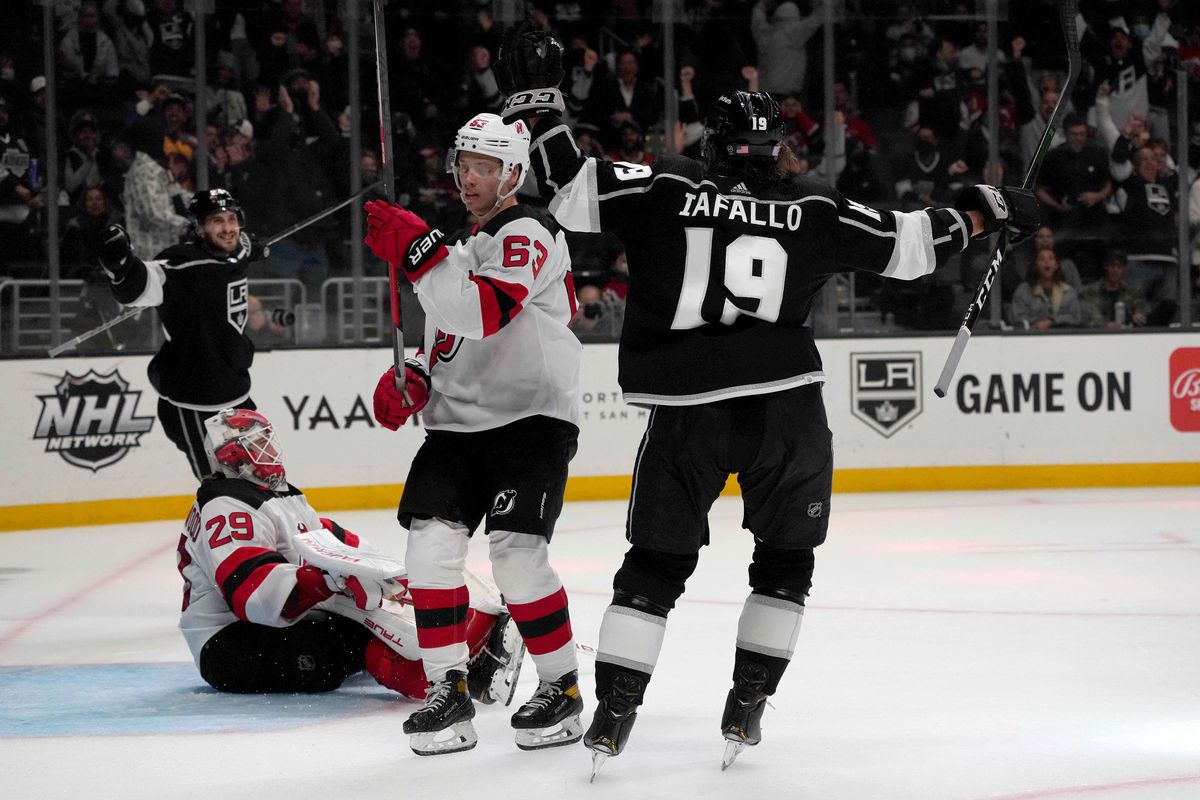 The LA Kings notched their fourth consecutive win on Friday, topping the New Jersey Devils 3-2 in overtime. Here are a few takeaways.

The LA Kings wrapped up their five-game homestand with a 3-2 overtime victory against the New Jersey Devils on Friday night. Cal Petersen got the start in net, stopping 21-of-23 shots sent his way. The Kings are off to a four-game road trip north of the border beginning Monday night with a stop in Toronto against the Maple Leafs.

Before officially putting the homestand in the rearview mirror, here are three takeaways from the win on Friday.

The Kings went 1-for-6 on the powerplay, and their only conversion came from an absolute rocket off the stick of Arthur Kaliyev. After Adrian Kempe drew a high-sticking penalty, Phillip Danault won the faceoff in the Kings’ attacking zone.

After Matt Roy settled the puck near the blue line, he dished the puck to Kaliyev, who sniped a laser just above the left dot past Devils’ netminder Mackenzie Blackwood.

For Kaliyev, the tally marked his third goal of the season and his second powerplay goal. Over his last five games, the 20-year-old has four points.

“Sometimes it’s actually pretty simple. Grab the puck, shoot it at the net, see what happens,” Kings’ head coach Todd McLellan said of the powerplay’s lackluster performance overall. “We’ve got some stubborn players right now that aren’t seeing that as much, they’re not valuing it enough. Even Arthur, I told him on the bench after the first power play, that’s what you’re here for. No one is going to ever get mad at you for shooting the puck, the way you shoot it. He did and good for him.”

2. Have to be better against the extra attacker

For the second consecutive game, the LA Kings failed to close out a game in regulation. After the St. Louis Blues tied the game with 7.1 seconds remaining in regulation on Wednesday, the Devils followed suit with a game-tying tally with 24 seconds left on Friday.

Clinging to a 2-1 lead, the Kings were tasked with closing out the game after the Devils brought on the extra attacker with just over one minute remaining.

“Frustration level existed again, but it’s going to be that way for a while,” McLellan explained. “I think we’re showing some maturity to fight through it a little bit, to recover at the end again from an empty netter. Those are all good things, and of course, the win. Not a Picasso, but it’s points.”

With the game headed to overtime, the Kings were guaranteed at least a point, but winning the game would obviously end the homestand on a positive note. On Wednesday, the Kings and Blues needed a shootout to settle the score, but Phillip Danault and Alex Iafallo ensured this game would be settled during the extra five-minute period.

The play happened because of Iafallo and Danault’s excellent forechecking in the Devils’ defensive zone. Danault created a turnover behind the net, finding Iafallo in the slot, who ripped a wrist shot past Blackwood to give the Kings the final advantage.

For Iafallo, he has four goals over the last five games, but he has seven points over that span.

“We were talking about it before the shift happened, before the faceoff, to get on them and stay on them,” Iafallo said on the play. “We won the faceoff, got it back, and he was able to get the puck in. I just wanted to get to the front once I saw him get the puck, and I just had to shoot it in pretty much. Nice play by Philly.”

As noted, the LA Kings are off until Monday, with puck drop in Toronto set for 4:30 pm PT.

On a Roll in 2021, LA Kings Prospect Martin Chromiak Excelling in OHL