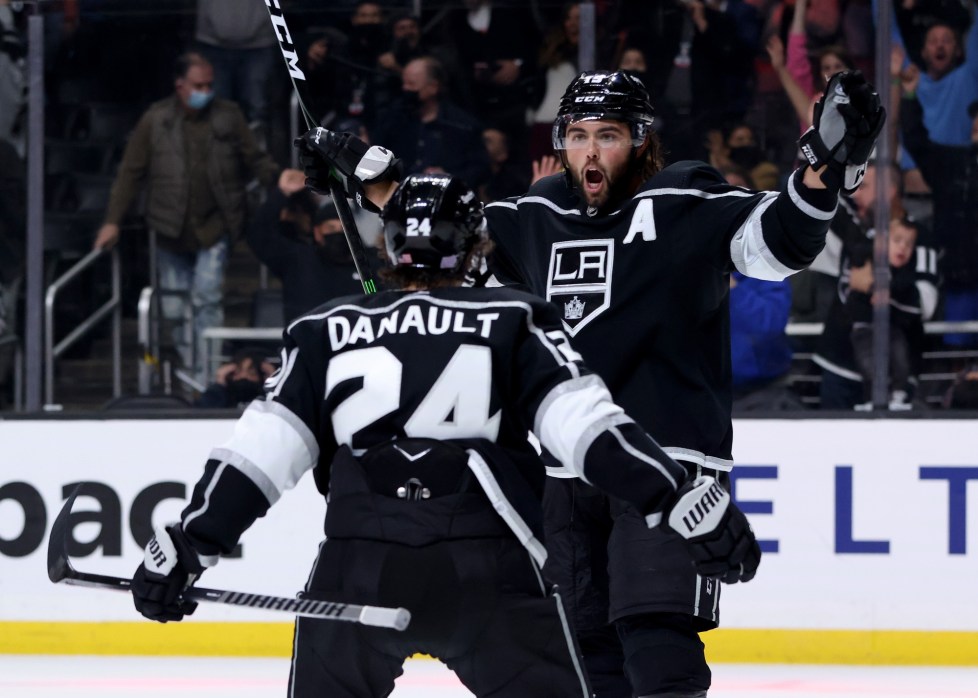 The LA Kings are on a roll with four-straight wins. A big reason for that is the play of Friday’s overtime hero, Alex Iafallo.

Back in April, the LA Kings signed pending UFA Alex Iafallo to a four-year, $16-million contract extension. So far, the native of Eden, New York, has lived up to his new contract with, most recently, an overtime-winning goal to give the silver-and-black their fourth-straight victory, edging the New Jersey Devils by a 3-2 count.

“We talked about it before the shift happened: win the faceoff to get on and just to stay on,” Iafallo said following Friday’s win of his overtime winner. “[Phillip Danault] won the faceoff, kind of got it back there. He was able to get the puck and I just wanted to get to the front because I saw him and get the puck and just shoot it. Nice play by Philly.”

Much like their shootout win versus St. Louis earlier in the week, the Kings surrendered the game-tying goal in the final 30 seconds of regulation. Also like their outing against the Blues, though, the silver-and-black were undeterred. Instead of losing their momentum, they regrouped — this time not needing a shootout.

On the OT winner, the aforementioned Phillip Danault, brought to Los Angeles for his sharp defensive prowess, stole the puck behind the Devils net, immediately feeding Iafallo in front, making no mistake with a top-corner shot that beat netminder Mackenzie Blackwood.

Speaking of Danault, Iafallo touched on his chemistry with the first-year King and how they complement each other with their respective two-way styles of play.

“Yeah, he’s very good at it, especially in the D-zone and every zone,” Iafallo said of Danault playing both sides of the puck. “He’s got support in getting the puck back. He can read which way the defensive forward is going and get a little tick on the puck. So, that’s really helpful and that goes a long way.”

In April 2017, roughly one week after taking over the club’s GM duties from Dean Lombardi, Rob Blake made a bold move, signing Iafallo, an undrafted left winger out of the University of Minnesota-Duluth. While he was established as a solid two-way forward at the collegiate level, there was some curiosity as to whether Iafallo could succeed at the NHL level. It was a matter of hoping that every other NHL team missed the boat a few times over by leaving the 6’0″, 188-pounder undrafted. So far, the latter has been the case.

Achieving career highs across the board in 2019-20 (17-26-43), Iafallo maintained a good pace last season, collecting 30 points (13-17-30) in 55 games last season. So far this season, the 27-year-old hasn’t slowed his pace at all. In fact, his overtime winner on Friday extends his point streak to five games. The tally also marked his second game-winning goal in his last three games.

“I’m just trying to shoot the puck,” a modest Iafallo said of said point streak. “I worked on it all summer: just shooting the puck from every angle. And if you shoot it, sometimes rebounds come out to you and get it back, but at the same time, you just got to play your game. You don’t really think about it. You’re just shooting the puck and it goes in.”

In 11 games so far this season, Alex Iafallo has 10 points to his name (5-5-10) and is on pace to surpass his totals from last season. After all, the UMD alum has played in one-quarter of the games he did last season and has a third of the points. Whichever way you look at it, though, the fifth-year King is off to a great start and, touch wood, making Rob Blake and company look all the better for choosing to extend him.

The LA Kings were a perfect 4-0 on their homestand, but now, hit the road for a few, beginning on Monday night to visit the Toronto Maple Leafs.

On a Roll in 2021, LA Kings Prospect Martin Chromiak Excelling in OHL