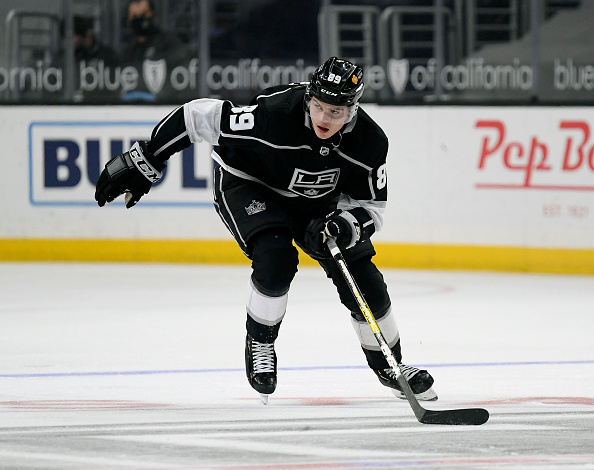 One of the few bright spots on Thursday, Rasmus Kupari talks about his first goal of the season in the LA Kings’ 3-2 loss.

At the 4C on Thursday, forward Rasmus Kupari made the most of his ice time in the LA Kings’ 3-2 loss to the Winnipeg Jets. Trailing 1-0 and with under nine minutes remaining in the opening period, Kupari was fed a pass from Arthur Kaliyev in transition, and the former buried the puck past Jets’ netminder Eric Comrie.

Breaking down the play – Jets’ defenseman Logan Stanley intercepted Kaliyev’s initial pass to Kupari at the blueline, but the Finnish forward jarred the puck loose. Kupari’s momentum carried him to mid-ice, where Kaliyev, who retrieved the loose puck, shuffled the puck up-ice, and Kupari was off to the races.

“Obviously, [I’m] happy to score a goal, get on the scoresheet, but it’s frustrating to lose like that,” Kupari admitted.

“I actually tried that move in morning skate today, it was on my mind. I had good speed, I’ve seen [Aleksander] Barkov do that move a few times, and it worked this time. I tried to fake a little bit and chip it back over the elbow. I actually did the same move last year with the Reign. It was just on my mind, and I wanted to try that,” he added.

The goal was Kupari’s first of the season and his second NHL goal. The 21-year-old played in seven games during the shortened 2021 NHL season. His first tally came in his fourth game against the Colorado Avalanche while playing a season-high 12:53 TOI.

The Kings’ 2018 first-round pick spent time between the NHL and AHL clubs last season, accumulating eight goals and 23 points in 32 games with the Ontario Reign. Kupari has played in six of the seven games this year, but he’s mostly been limited to bottom-six forward minutes. He logged just 9:15 TOI on Thursday, but he obviously had the goal while registering four shots on goal, two hits, and two blocked shots.

His physicality has been a noticeable element in his game this season. At 6-foot-1, 183 pounds, Kupari presents a matchup problem for undersized defensemen. One particular play in the Jets’ attacking zone comes to mind where Kupari used his body to separate the man from the puck, something we had not yet seen from the young forward at the NHL level. To this point, Kupari’s speed and stick handling have been apparent in his limited sample size.

“I think, when I try to be physical, I get a few hits,” Kupari concluded. “I feel like I’m on the game when I try to play physical a little bit. If not, I could be a little bit more out of my zone, my comfort zone, so I think that’s a good addition to my game, to try and be physical.”

The Kings have scored two or fewer goals in five of the seven games this season. Kupari is tied for third with Gabe Vilardi on the team with a 14.3 percent shot rate, behind Anze Kopitar and Drew Doughty, despite logging the lowest ice-time of the four. His play-driving ability has been a welcome addition to this squad, but the team needs more players to step up.

Los Angeles returns to the ice on Saturday against Montreal, with puck drop set for 1 pm PT.