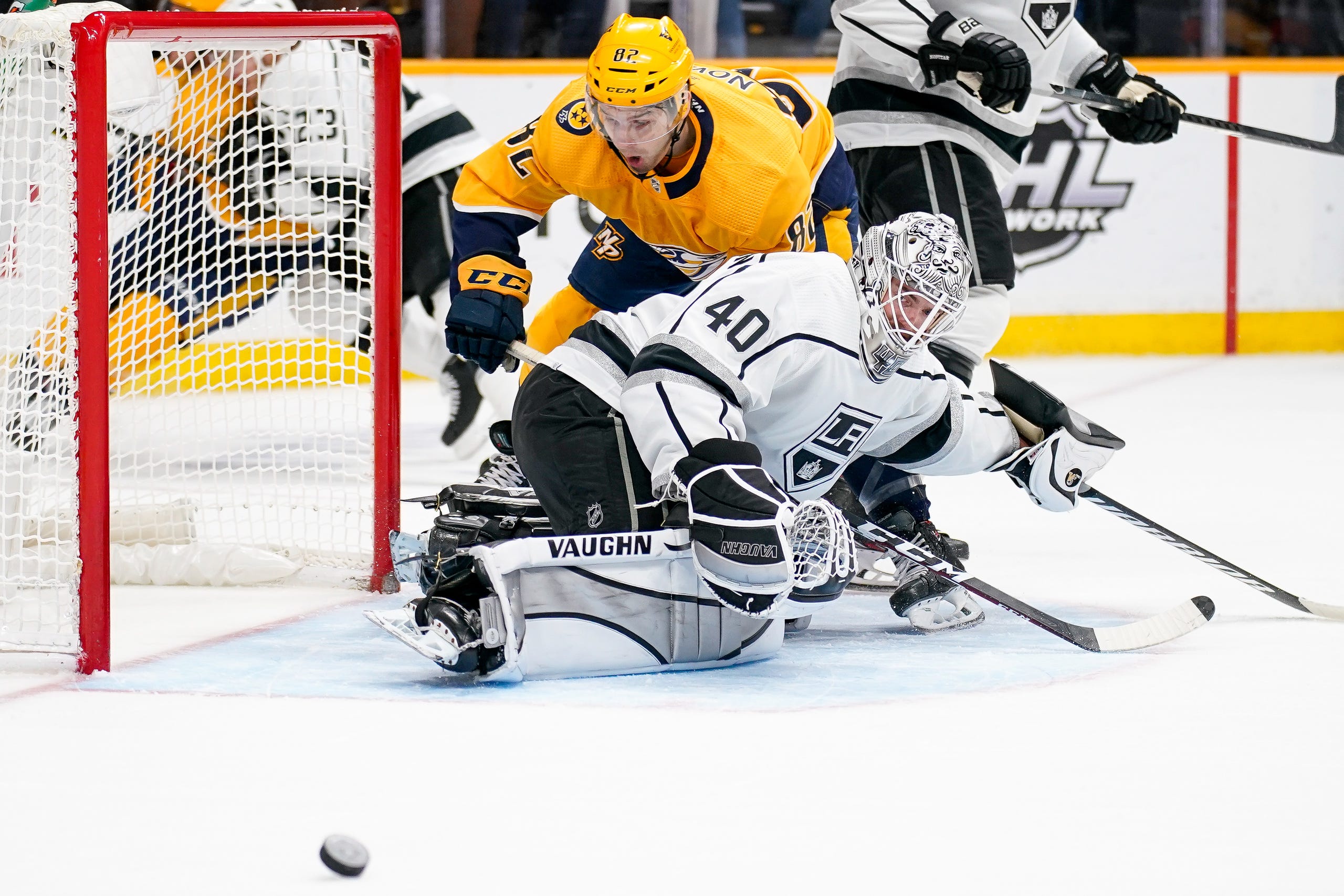 After taking a 1-0 lead in the second period, the LA Kings fell to the Nashville Predators for their first road loss of the year on Tuesday.

Facing a Predators team looking for their first win, Kings’ netminder Cal Petersen saw a lot of action early on. The Predators led the way with 13-7 shots on goal and won 75 percent of their faceoffs in the first period. Eeli Tolvanen whiffed on a shot right in front of Petersen that looked like a great chance for Nashville.

On their first penalty kill of the evening, Kings’ defenseman Alex Edler found himself without a stick, but that didn’t stop him from helping to clear the zone. Up against the end boards, Edler shuffled the puck using his skate to Phillip Danault to send the play in the opposite direction. That’s where Edler’s experience comes in handy – he stayed cool, calm, and collected where a younger player may not have the creativity built into their skillset quite yet.

In his first game back at Bridgestone Arena, Viktor Arvidsson was given a nice standing ovation and a video tribute from the Nashville faithful.

Not sure if I truly understood how well-liked Viktor Arvidsson is in Nashville until the tribute video. Place went absolutely bananas.

Anze Kopitar continues to prove that age is just a number. The LA Kings captain tallied his fifth goal in three games, a rocket from just above the left shot that got past Juuse Saros.

5. Forsberg denied on the penalty shot

With under a minute to play in the second period, Filip Forsberg deked Mikey Anderson with only the goaltender to beat. Drew Doughty caught Forsberg but hit him with his stick from behind, drawing a penalty shot. Petersen continued his dominance through two periods, stopping Forsberg’s shot.

6. Where is the team from last Thursday?

It’s hard to win a game when you don’t have the puck, but the LA Kings forced 26 shots on net and came away with one goal. Again, the Kings had a 43.7 CF% via Natural Stat Trick, but they’re already falling back into a lot of the same tendencies that plagued them last year. The team’s top line has generated nearly half their points through the first three games.

If you take away Drew Doughty’s seven points along the blueline, the Kings’ top line has produced 65% of the team’s output. Los Angeles needs all four lines to contribute or swap out players who can.

The LA Kings are back in action from Dallas on Friday night, with puck drop set for 5:30 pm PT.