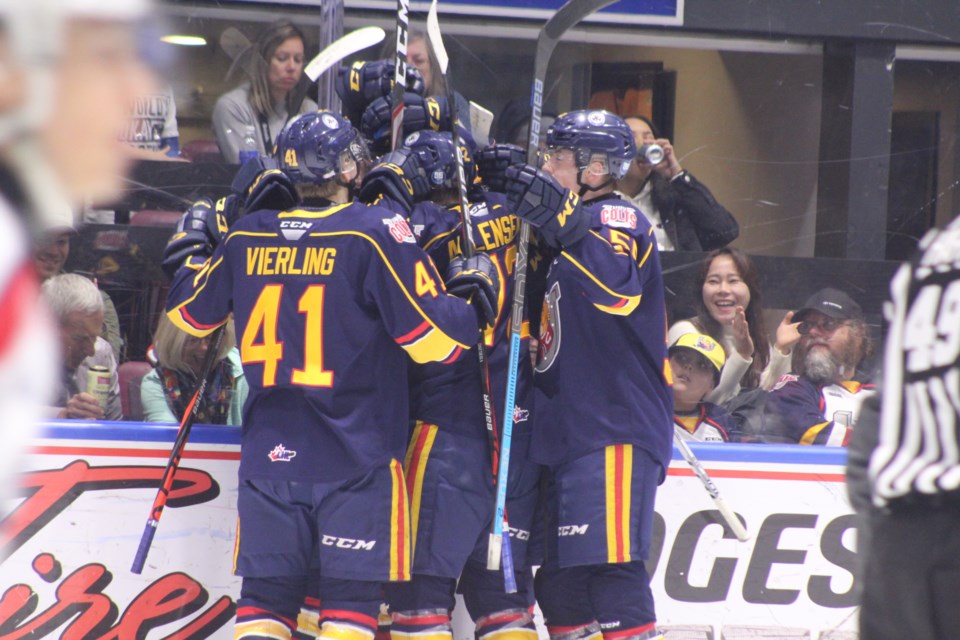 With Brandt Clarke’s return to the Barrie Colts lineup, the LA Kings had all three of their OHL prospects in action this past weekend.

The LA Kings contingent in the Ontario Hockey League were back at it this weekend, which included the return of defenseman Brandt Clarke.

Clarke, who rejoined the Barrie Colts this past Thursday, came back to the lineup en route to a losing effort. While the Kings’ first-round pick from 2021 had a solid return with two assists, the Colts couldn’t muster up much of a fight against the Soo Greyhounds, losing by a 6-3 count. Clarke, however, did finish the evening with a plus-one rating and three shots on goal to earn him Second Star of the Game honours.

While he was held pointless in his next game, Clarke and the Colts nonetheless got into the win column on Saturday, shutting out the Mississauga Steelheads 2-0 for their first victory of the season. Clarke also finished the game with another plus-one rating.

The Colts then hit the road for a game the next day to take on the North Bay Battalion. Clarke recorded an assist but finished with a minus-two rating. Nevertheless, the Colts won by a 6-4 count to improve to 2-2-1 on the year.

Colts close out Battalion in North Bay to pick up second win of the season.

After finishing their opening weekend with back-to-back losses, the Kingston Frontenacs needed a shift in momentum this weekend. They got just that, winning both of their games — with, of course, some help from Martin Chromiak.

At home on Friday night, the Fronts hosted the Sudbury Wolves. Kingston won the game by a 5-4 count but not before getting some assistance from Chromiak as the Kings prospect scored a goal and added an assist en route. Chromiak also finished the evening with four shots on goal and a plus-one rating.

The following night, the Fronts were in Peterborough taking on the Petes. Chromiak added another assist en route to a 3-1 Kingston win. He also had five goals but finished the evening at minus-one. Nevertheless, Kingston improves to 3-2-0 on the young season.

8 minutes into the game and we're locked at zeros.#KGNatPBO pic.twitter.com/SzoQqpCMOJ

Coming off a big week where he was named the club’s new captain, Francesco Pinelli and the Kitchener Rangers only had one game this weekend. On Friday night, the Rangers put their undefeated record on the line against the visiting Sarnia Sting.

The Rangers’ perfect record remained intact after Friday’s outing, defeating the Sting by a 5-1 count. As for Captain Pinelli, he scored a goal and added an assist to go in hand with a plus-one rating, five shots on goal and going 6-for-14 in the faceoff circle. That goal, by the way, was of the shorthanded variety, and it was a great-looking one, to boot.

Overall, a solid performance by Pinelli and the Rangers, who improve to 3-0-0 on the year.

Shorthanded mastery from the @OHLRangers captain 👌@LAKings prospect Francesco Pinelli (@CePinelli71) with a dominant display for his third of the season in Friday's win 🎥 pic.twitter.com/j8yjpjkZ13

Overall, another successful weekend for the LA Kings contingent in the OHL. Brandt Clarke’s back in the lineup, Francesco Pinelli’s donning the ‘C’, and Martin Chromiak keeps rolling with an up-and-coming Frontenacs squad. Heck, even when the latter doesn’t score, he’s fun to watch.

As for what’s next for these three teams, the Colts play next on Thursday night on the road against the Niagara Ice Dogs. As for the Frontenacs, they play host to the Peterborough Petes this Friday night, while the Kitchener Rangers will put their undefeated record on the line on Tuesday when they play host to the Guelph Storm.

Stay tuned for another great week/weekend of OHL hockey.