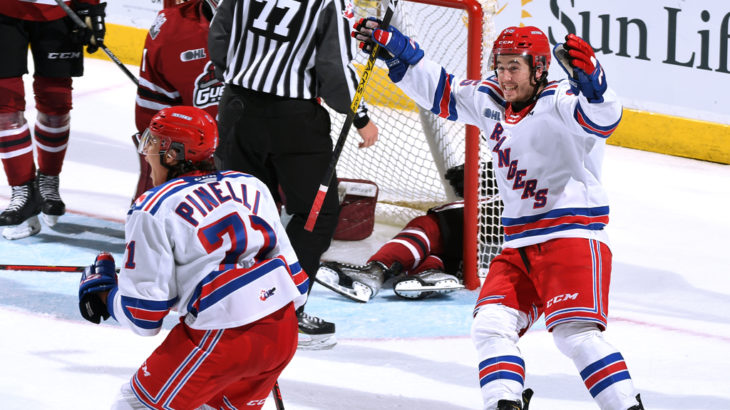 The OHL is back at last and for the LA Kings, it’s especially exciting with their representation in the league.

With the sports world getting back to a collective level of normality, teams and fans are eager for a brand new chapter. The Ontario Hockey League is no exception to this, especially after having to cancel their entire 2020-21 season due to COVID-19. But, after over a year-and-a-half, the league was back in action this past weekend with a pair of LA Kings prospects off to auspicious starts.

After a very impressive showing at Kings training camp last month, Martin Chromiak has further proven to the silver-and-black what to expect of him in the near future. While not making the team may have been disappointing for him, the Slovakian returned to his junior team, Kingston Frontenacs, with some unfinished business.

From hoping to turn the previously struggling Frontenacs fortunes around to playing on a line with next year’s first-overall favorite in Shane Wright, there is plenty of incentive for Chromiak to excel in the Limestone City in 2021-22. In fact, the Kings prospect scored the first Frontenac goal of the campaign on Friday en route to a convincing 8-1 win over the Ottawa 67’s.

Chromiak, who the Kings drafted in the fifth round (128th overall) in 2020, had just the one goal on Friday, but he was a force nonetheless.

Constantly creating chances for himself and his linemates, it isn’t far-fetched to suggest that Kingston could have won by an even bigger margin on Friday. Chromiak finished the evening with a plus-2 rating and three shots on goal.

Unfortunately, the Frontenacs were soundly beaten the following evening — a 7-2 count courtesy of the Mississauga Steelheads. Chromiak was held pointless but did register six shots on goal and a modest minus-1 rating. Kingston then lost again on Sunday as the 67’s avenged their beating on Friday by a 3-2 count.

Despite the latter defeat, though, Chromiak collected two assists and a plus-one rating with four shots on goal.

Regardless of the losses in the latter matchups, though, do look for Chromiak and the Frontenacs to make a lot of noise this season.

First goal of the season and in the new uniforms goes to Martin Chromiak!#GoFrontsGo | @MatoChromiak8 pic.twitter.com/iIuZxfgvGN

One of the Kings’ newer prospects was also in action this weekend.

Drafted in the second round (42nd overall) in 2021, Francesco Pinelli made a good first impression at his maiden training camp for the Kings before returning to his junior club, the Kitchener Rangers. Like Chromiak, Pinelli is back in the OHL with some unfinished business. After all, also like Chromiak, Pinelli’s rookie season of 2019-20 was cut short due to COVID, so here’s hoping that the 2021-22 campaign that 2021-22 will be a promising campaign for the 18-year-old.

In a back-and-forth affair on Friday night, Pinelli and the Rangers hosted the Guelph Storm — the former junior team of Dustin Brown and Drew Doughty. Pinelli scored once and added two assists — the latter of which came on his club’s overtime winner — to give Kitchener a thrilling 6-5 victory. The Stoney Creek, Ont., native, an alternate captain this season, also registered a plus-2 rating, four shots on goal, and went 7-for-18 in the faceoff circle. He even earned First Star of the Game honors.

On Saturday, the Frontenacs clashed with the Storm again in Guelph, where Pinelli scored to help his team sweep the home-and-home series with a 5-4 win. The Kings prospect finished the game at minus-1, three shots on goal and went 6-for-15 in the faceoff dot.

As for his first goal of the season, it was a pretty one.

Fires home after a nice drop pass from Zidlicky to make it 2-0 @OHLRangers!#OHL #LAKings #GoKingsGo pic.twitter.com/QLOGPTFXj2

Overall, it was a very promising start to the OHL season for the LA Kings contingent. Another of said contingent is defenseman Brandt Clarke, the club’s eighth overall pick in 2021. He has yet to suit up for his junior team, the Barrie Colts, this season, but when he does, expect the Ottawa native to make a difference.

The Colts, by the way, have started their campaign at 0-1-1.

Be sure to stay tuned for more from the LA Kings representation in the OHL this season — all season long.