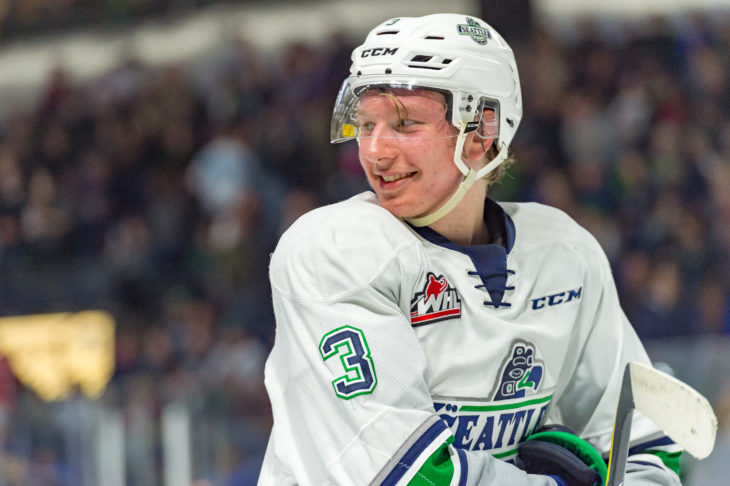 Among those at LA Kings training camp is the less-familiar Cade McNelly. But, the big blueliner still has plenty to offer.

Many of the names at LA Kings training camp this year are familiar ones. However, there are some less familiar names who have been thrown into the mix, if you will, and that includes big, physical defenseman Cade McNelly.

A native of Westlock, Alta., McNelly spent all four seasons of his major-junior career with the WHL’s Seattle Thunderbirds — all under head coach Matt O’Dette.

I recently spoke with Coach O’Dette about McNelly on advice for the youngster while he’s in southern California as well as touching on his physical game, which has helped him stand out in the WHL and even now at training camp.

“He’s a big guy, and first and foremost, he’s a fearless hockey player,” O’Dette emphasized. “He’s not worried about the physical side of things. He actually welcomes it; he likes to mix it up to say the least. He likes confrontation. He’s kind of a throwback guy that way. So, he’s not afraid to play physical and then back that up with any consequences that might comfort that. You’d think he came out of the 90’s with his mindset and the way he plays physically. You don’t see many players like that nowadays. He loves the physical part of the game, he loves the confrontation, and there’s not many of those guys still around, and that is part of what makes them valuable.

While his size is certainly noticeable at 6’3” and 205 pounds, it is McNelly’s reputation as an intimidating physical presence that has paved the way for success in other areas.

“Having that reputation, I think, gives him a little more space out there, and then people can see that you’ve got good skills where he can make the plays that he needs to make,” O’Dette added of McNelly. “So, his strength is definitely the physical side of the game, but he’s consistently improving the other parts of his game: his skating, his puck-handling, things like that.”

McNelly has certainly been a solid asset for the Thunderbirds lo these past four years, but this summer, he was traded to the Vancouver Giants. So, for McNelly, who turns 20 next month, he will hope to make a name for himself in Van City — assuming he doesn’t make the cut in Los Angeles — and while he is certainly sad to see his big blueliner go, O’Dette wasn’t short on high praise for McNelly.

“During his time with us, I think the Thunderbirds had an identity and a reputation of being a physical, hard-to-play-against team,” noted the Seattle head coach. “He definitely helped in that department. He helped maintain that physical aspect of our team. We have several of those guys, so we felt he was expendable to be traded to another team. But, as far as his attitude, a good attitude in terms of being a team guy, [knowing] what he has to do to improve and put in that work every day. I think there’s some growth that still needs to happen with some of his off-ice stuff. I think he can mature a little bit more in that department, but I think, overall, he’s a good kid and just willing to do what the team needs him to do to be successful.”

As for other areas McNelly could use some improvement in, the Thunderbirds bench boss, a former physical defenseman himself at 6’5″, knows that his now-former blueliner cannot solely rely on his physical game to get ahead.

“I think when you’re a big defenseman, you always have to continue to improve your skating and your mobility, so that’s definitely one area you need to improve on,” O’Dette observed. “I think everyone knows that he’s a physical player and he can handle himself that way, but he needs to prove that he has the playing ability to play at the professional level. The physical play will get scouts’ and managements’ attention, but he needs to back up the skill side of the game by showing that he can play the game of hockey well.”

On Monday evening, while he did Duke it out with veteran Andrew Ladd, McNelly registered an assist on the Kings’ only goal — courtesy of Sean Walker — in the club’s preseason debut. Yet, while the silver-and-black fell to Arizona by a 2-1 count, McNelly nonetheless made an impact. In addition to his fight and his helper, the big blueliner registered a shot on goal, a hit, and a shot block while logging 12:14 of total ice time.

As for Matt O’Dette, we then wrapped up our conversation with the coach offering some advice for his youngster at Kings training camp.

“To be himself,” a succinct O’Dette said. “Show his physical side of play but also be mindful that [Kings coaches and management] want to see your ability to play hockey as well. So, show that side of yourself to management and not just your physical side.”

As training camp for the LA Kings continues, the better idea we will have as to how the opening-night roster will look. Cade McNelly survived the first round of cuts but regardless, if he gets through the next round or not, the former Seattle Thunderbird has nonetheless made a positive impression on the Kings and their fanbase, especially those who miss that big, physical presence who is never afraid to drop the gloves for a momentum swing in their team’s favour.

The most recent in the latter category is probably Kurtis MacDermid, although his less-than-stellar defensive skills made the Kings’ former No. 56 an odd man out, so to speak. For McNelly, the comfort level is higher than expected as he is in Los Angeles with former Thunderbirds teammate, defenseman Austin Strand. The latter even signed with the Kings as an undrafted free agent — exactly what McNelly is — and has been impressive both in Ontario and during his brief call-up with the Kings last season.

Whether or not McNelly can follow in the same path as his former major-junior teammate remains to be seen. Still, even if he doesn’t make the cut this week in Los Angeles, Cade McNelly has proven that he is not content to sit idly by and just take in the experience. the Westlock, Alta., native has made the most of his opportunity at training camp this week and will be determined to keep making noise should he not earn a contract with either the Kings or the Reign.

As Matt O’Dette had state, Cade McNelly is a “throwback guy” and that is just one reason why the 19-year-old has turned a lot of heads this week in southern California.