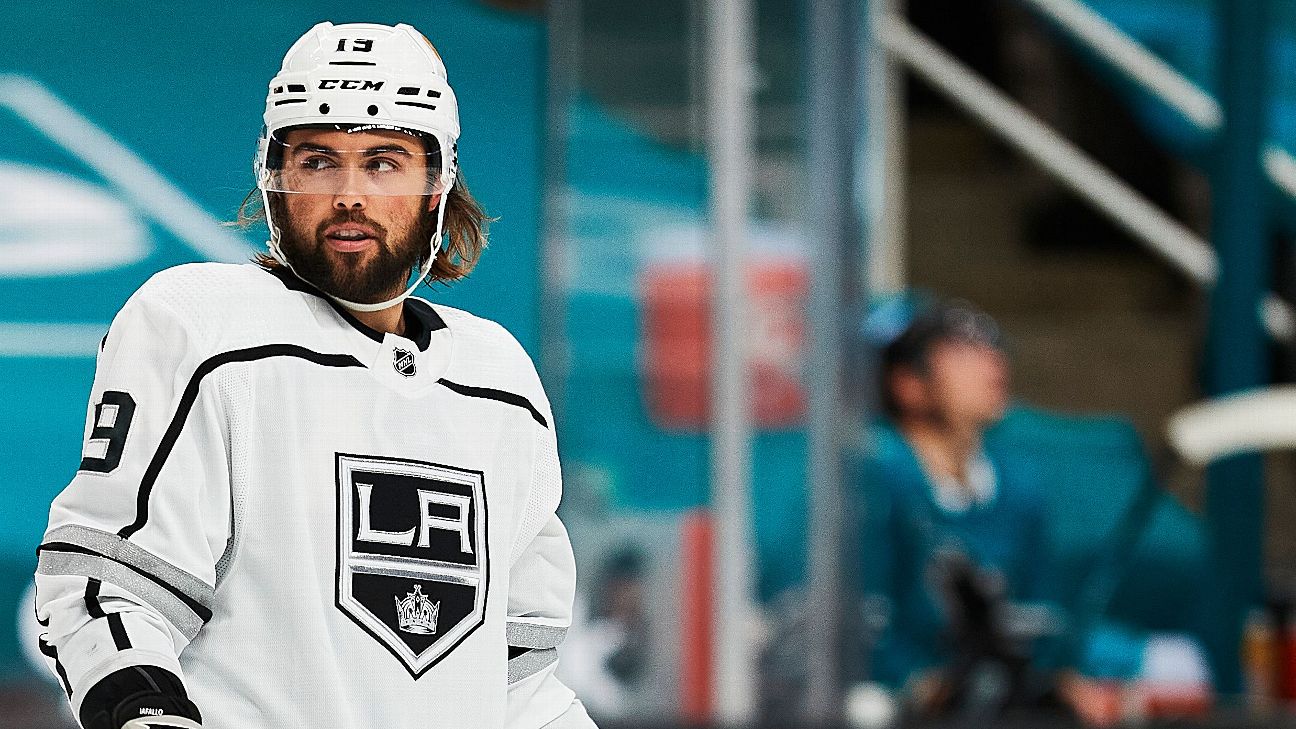 Primarily playing on the top line the last four seasons, is that still in the cards for LA Kings forward Alex Iafallo?

Alex Iafallo‘s rise to the LA Kings top line in such a short amount of time is nothing short of spectacular. Coming out of the University of Minnesota-Duluth, the Eden, New York, native caught the attention of several NHL clubs and opted to sign an entry-level deal in Los Angeles. Flash forward four years later, Iafallo has become what head coach Todd McLellan has deemed the secondary core, or the tier of players behind the veterans left from the two Stanley Cup runs.

“That group is a real important group for our organization now, and obviously in the future,” McLellan said. “We often talk about the young prospects coming, and the veteran five, but the group in between is huge. It’s really important that they grow in their game, that they give us more than they have in the past, and that they accept some of the leadership as we move forward.”

Of course, the veteran five is now the veteran four after Jeff Carter was traded at the deadline last season. However, the move coincided with the Kings committing four more years to Iafallo, inking the young forward to a $16M contract.

“Super pumped. I’m glad to be here in this organization and play with these great players,” Iafallo said hours after signing his extension. “Since the day I got here, I just wanted to play my game and do everything that I can. Whether it’s the PK or the powerplay or just little things in the D-zone, I just want to do it well and provide a good leadership role for the young guys.”

In the shortened 2021 schedule, the 27-year-old forward accumulated 13 goals and 30 points in 55 games. Added, he logged a career-high 19:53 TOI, playing a key role in the Kings’ special teams units, as well. Eight of Iafallo’s 30 points came on the powerplay. He’s become a well-rounded player for the organization, demonstrating excellent defensive abilities as well and going into the ugly areas of the ice to win puck battles.

As a team, the LA Kings were not great in even-strength situations, finishing 25th in the league with 2.54 goals-per-game last season.

Individually, Iafallo accounted for 1.60 points per 60 minutes in even-strength situations — seventh-best among forwards. But, to provide some perspective, look at a middle-of-the-pack offensive team like the Winnipeg Jets, who scored 3.04 goals per game, and Iafallo’s P/60 rate would fall in the mid-to-lower half of the team.

That said, he’s been a valuable asset to the Kings’ power play, accounting for 3.02 points per 60 minutes (PPP/60) on the man advantage, which, by the way, was fourth-best on the team in 2021. And I guess, if we’re going to compare apples to apples, Iafallo’s powerplay metrics would have made him a top-seven or eight player on the Winnipeg roster.

“I’ve had a lot of good captains and assistant captains, so I learned a lot from them,” Iafallo noted in his exit interview. “As you grow, year-by-year, obviously you want to get better and improve every year. I feel like this was the time for me to grow leadership-wise. Looking at all the veterans and leaders, I just wanted to take a chapter from them, help the younger guys and help the team grow. That’s just the step I wanted to take this year.”

To provide further perspective, Iafallo’s PPP/60 was up there with some pretty big names:

He’s been the definition of consistency since entering the league in 2017. I am confident that Iafallo will post, at worst, similar numbers to last season in the upcoming campaign. With an improved roster, there’s also the potential for him to contribute a few more points for the Kings — which, if you consider that Los Angeles finished with the fifth-fewest goals (142) in 2021, they would need to score approximately 20 more goals to be considered average offensively.

Of course, no one is expecting Iafallo to carry the load himself. But, he’s played with Anze Kopitar his entire career, so some thought will have to go into where he slots into the lineup in the 2021-22 season. Kopitar, obviously, makes everyone around him a better player. Still, I think most expected Alex Iafallo to drop down to the second line when the Kings made improvements to the roster. If the Kings favor a top line of Brown – Kopitar – Arvidsson or some variation of that, not including Iafallo, then the latter could move down to flank Phillip Danault on the second line.

The primary concern there, though, is that Danault was brought in more for his defensive responsibilities, which could hurt Iafallo’s production over the course of a full season. On the other side of the coin, the defense on the second line would be off-the-charts good. And perhaps the last option, albeit a very small sample size — as in six-game sample size — the line of Iafallo – Vilardi – Andersson produced a 52.9 xGF% in the final few games of the 2021 season.

While nothing is guaranteed, perhaps the Kings keep the top line intact with Iafallo – Kopitar – Brown to start the season. But, it will be interesting to see how the lineup evolves throughout the season, especially as injuries arise and prospects graduate to the NHL, where Arthur Kaliyev could be a terrific sniper alongside Kopitar.

See how the fans voted.

Where does Alex Iafallo play in the 2021-22 season? #GoKingsGo